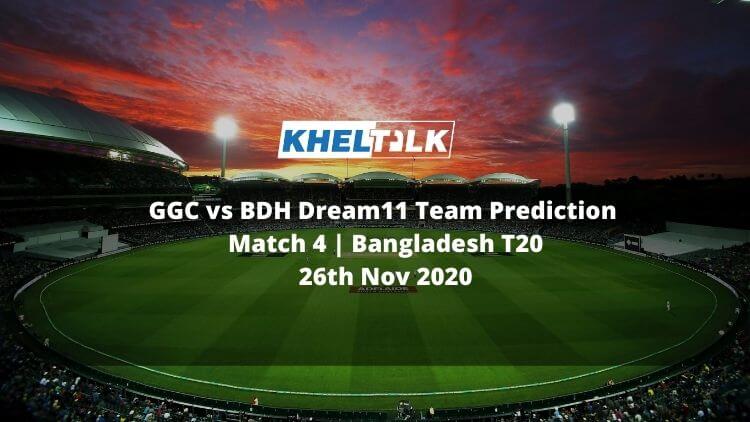 In the fourth match of the Bangladesh T20 Gazi Group Chattagorm take on Beximco Dhaka on 26th November at Dhaka. Both sides are loaded with superstar players. So it should be an exciting contest in this tournament. Let’s go through our Dream11 Prediction for the upcoming game of the Bangladesh T20 Cup between GGC and BDH.

As this is the morning game, the pitch will assist the bowlers in the first half. There will be movement off the deck and the batsmen will have to be cautious in the beginning. But the wicket will be easier to bat as the match progresses.

Muktar Ali has started the tournament on a very positive note. He was the pick of the bowlers in the first game and claimed 3 wickets. Ali bowled in the middle overs and choked the opponents with his effective variations. Hence will be very important in this match as well as in this game too he will be expected to tie down the batsmen. Also, he came good with the bat and scored 27 runs from 16 balls.

Mushfiqur Rahim showed why he is considered the leading batsman in Bangladesh with a well-made 41 runs in the first game. Rahim played with caution and stood at the crease for 34 balls reflecting his temperament. At the same time, he wasn’t afraid to play the big shots when the chances came. He hit 3 fours and 1 six in the last game. In this game too he will be expected to repeat his heroics.

S Sarkar is one of the best limited-overs batsmen in Bangladesh and he is full of talent and potential. He has experience of playing 50 T20I games and has scored 85 runs with a best of 62*. He has an average of 18.82 and a strike-rate of 125.35. Importantly he has scored 2 fifties as well. He is a very good bowler too and has claimed 6 wickets so far.

L Das is a high-quality wicket-keeper batsman. He has scored close to 2 thousand runs in 100 T20 games and has an average of 21.16. He has a strike-rate of 128.85 which showcases his batting prowess. L Das can bat in the top-order and he can also bat in the middle-order to finish games. His flexible batting approach makes him versatile.

GGC vs BDH Dream11 Prediction: Who will win the match