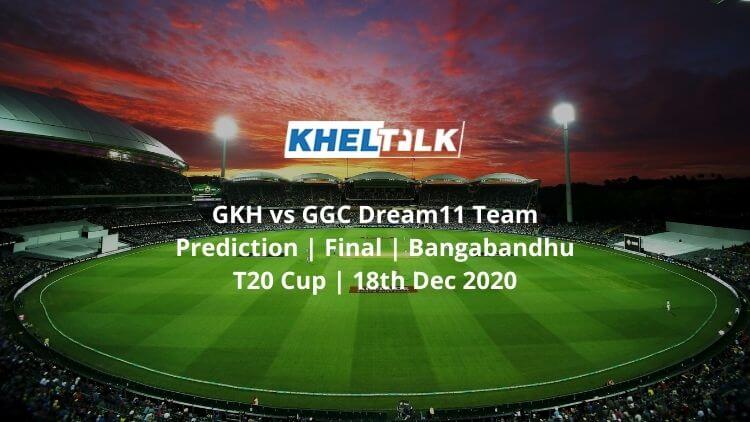 Gemcon Khulna will take on the Gazi Group Chattogram in the final of the Bangabandhu T20 Cup 2020. Gazi Group topped the points table while Gemcon Khulna ended up in the 2nd position. When these two teams met in Qualifier 1, almost flawless performance from Gemcon Khulna took them to the final as they defeated the Gazi Group by 47 runs. Gazi Group, in the 2nd Qualifier, went on to defeat Beximco Dhaka by seven wickets to qualify for the final. Let’s go through our Dream11 Team Prediction for the upcoming game between GKH vs GGC.

The conditions will assist the batsmen more but there will be something for the bowlers in the initial phase of the innings. This initial phase most likely will decide the winner of the contest.

Total Matches in the tournament so far– 23

Mustafizur Rahman is in terrific form and is currently the leading wicket-taker of the tournament. He has 21 wickets with an economy rate of 6.28.

Liton Das is the leading run-scorer of the tournament. He has 370 runs from his 9 outings with an average of 52.85. He has three fifties in the tournament so far.

Soumya Sarkar has vast experience and he will be the key player in this contest. He has 280 runs and 3 wickets in the tournament so far.

GKH vs GGC  Dream11 Team Prediction: Who will win the match

On papers, the team GKH are stronger than GGC. However, GGC has done extremely well to come this far. Mustafizur Rahman will be the difference between the two teams as GGC begin this contest as favorites. Nevertheless, this match will be a great entertainer. Our Dream11 Prediction experts expect it to be an exciting final of the Bangabandhu T20 Cup.

Esports has, in the contemporary world, come to the...