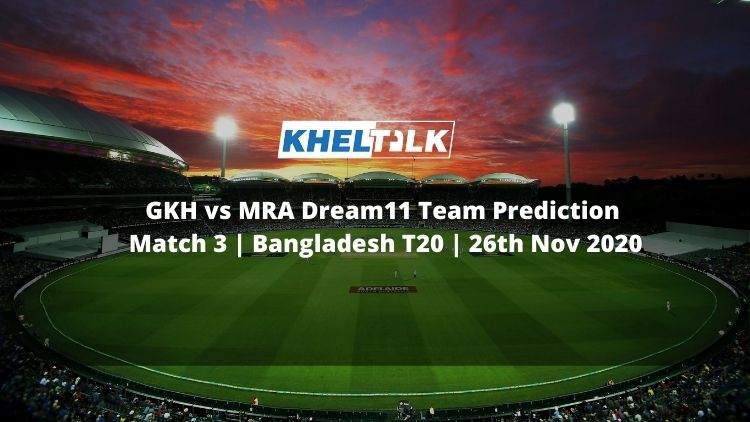 Gemcon Khulna will take on Minister Rajshahi in the 3rd match of the tournament. Both the teams are in fine form having won their first outing in this tournament. In the first match, Ariful Haque’s 38-ball 48 helped Gemcon Khulna to overcome Fortune Barishal while it was Mahedi Hasan’s all-around performance that saved the day for Minister Rajshahi. Gemcon Khulna currently tops the table because of their Net Run-Rate and Minister Rajshahi are at the second position. Let’s go through our Dream11 Prediction for the upcoming game of the T20 League between GKH vs MRA.

From the previous two matches which happened at this venue, we can clearly see that the pitch offers support for both batsmen and bowlers. The teams have managed to reach 150 with ease and the chasing isn’t tough as well.

Shakib Al Hasan is undoubtedly the popular choice for the captain in the fantasy side. He needs no introduction and in T20s, he has 4985 and has picked up 355 wickets in his T20 career.

Mahmudullah had a quiet outing in the 1st match where he scored only 17 and ended up wicketless. Undoubtedly, he will be hoping for a better performance in this match. In his T20 career, he has 3890 runs with a strike-rate just above 120 and also has 102 wickets with an economy rate of 7.10.

Mahedi Hasan is likely to open the bowling and in the last match, he not only bowled well but also was the star with the bat. He had 50 from 32 deliveries and also ended up with 1 for 22.

GKH vs MRA  Dream11 Team Prediction: Who will win the match

On papers, Gemcon Khulna looks like a more balanced side than Minister Rajshahi and they will begin this contest as the favorites.