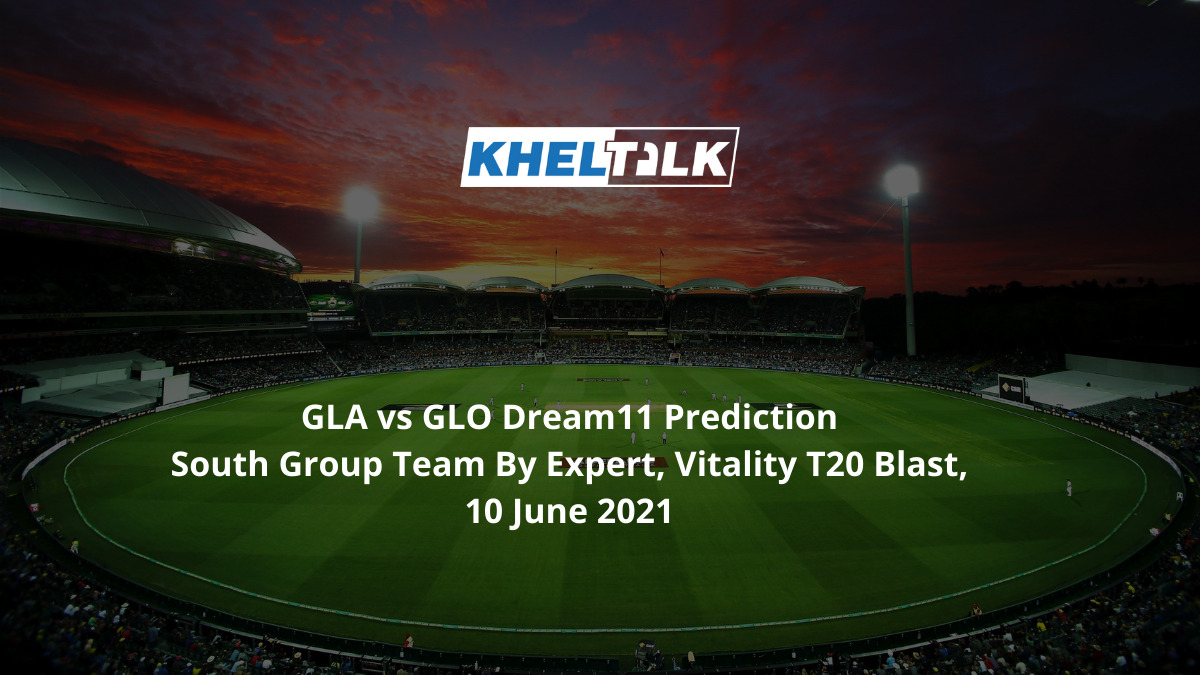 Welcome to GLA vs GLO Dream11 Prediction for Today’s Match Fantasy Cricket. Glamorgan will take on Gloucestershire in Match 5 of the Vitality T20 Blast on Thursday, June 10, 2021, at the Sophia Gardens, Cardiff. Keep reading to find out about the Match 5 GLA vs GLO Dream11 team today.

Glamorgan had a mixed 2020 season. They ended up in the fifth spot with four wins and five losses to their name. Andrew Balbirnie was their top performer with the bat while Timm van der Gugten dominated with the ball. This year, the team will have a few international stars who will be returning to the team after their national duties.

On the other hand, Gloucestershire ended the last season at the top of the group with seven wins to their name. However, the team was beaten in the semi-final by Surrey who won the rain-hit match by chasing down 74 within 11 overs.

In the last five meetings between these two teams, Glamorgan won three matches. While one match ended in a tie and the other was washed off due to rain.

The pitch assists the batters more and most of the teams prefer chasing first at this venue as the conditions don’t change much. There will be something for the spinners. So far, 42 T20s has been played here and 22 matches were won by the team batting second. The average first innings score at this venue is 155.

Both teams have international players who are just too good to be ignored. Also, it is good to go with more spinners and batters at this venue.

The team will be hoping that Ian Cockbain, Ryan Higgins, Miles Hammond among others come good today. It will be interesting to see how they rotate the bowlers here which will be led by Daniel Worrall.

The team will be boosted by the return Colin Ingram who missed out the 2020 season. Once again, Andrew Balbirnie will hold the key in this contest. Also, the team will feature Marnus Labuschagne who had a good season with Brisbane Heat recently.

Colin Ingram will be leading the batting attack for the team here. Ingram is in decent form at the moment and in the last two practice T20 matches, he had managed to score 71 runs. In T20s, he has scored 6942 runs while striking at 138.97.

Marnus Labuchagne will be rolling his arms for a few overs as well. The Australia all-rounder has 273 runs from his 15 innings and also has picked up 11 wickets in his T20 career. Recently, in a first-class match, he scored 107 runs.

Glenn Phillips is likely to play in this contest. In the practice match a couple of days ago, he smashed fifty from just 32 deliveries. The knock had seven fours and a couple of sixes. In T20s, he has 3030 runs with the best of 116*.

Michael Neser’s all-round ability can prove vital here. He will be playing the finishing role for the team and will lead the bowling attack. In the recent first-class match, Neser ended up picking up seven wickets. In T20s, he has 75 wickets and 420 runs.

Graeme van Buuren had a good outing in the practice match recently. He ended up scoring 69 runs from just 26 deliveries and the knock had six sixes and as many fours.

Prem Sisodiya is likely to open the bowling for his team. In the last two practice matches, he ended up picking four wickets while giving away just 32 runs from his eight overs.

Who Will Win Today Between GLA vs GLO Dream11 Prediction, Match 5?

According to Kheltalk’s astrology GLA vs GLO Dream11 match Prediction, Glamorgan will begin this contest as favourites. Going by what we have seen so far between these two teams, Glamorgan have always had the upper hand, at least in recent times. Thus, they have a good chance to win this contest.

According to Kheltalk’s GLA vs GLO Dream11 toss prediction, Glamorgan is likely to bowl first here. Whoever wins the toss, they are likely to opt for bowling here as the conditions will not change much for the 2nd session.