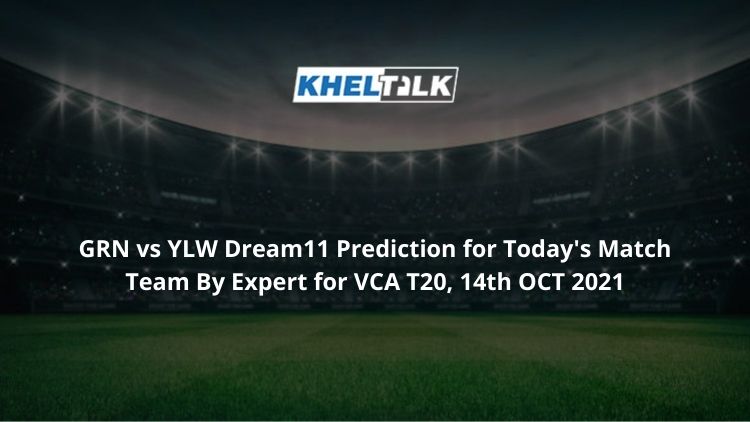 Green and Yellow will lock horns in this contest. Both teams are in decent form at the moment and is a must-win game for both teams. Thus, one can expect a close contest here. VCA Green is likely to begin this contest as underdogs. It will be interesting to see how they go here.

The spinners are likely to dominate here. The pitch will be on the slower side and scoring becomes tough during the second innings. The bowlers will have a slight upper hand here.

Rain is on cards but it is unlikely to take over the day. One can expect interruption. The temperature will be around 30 degrees Celcius for the day.

Led by Atharva Taide, the team has a good line-up. Harsh Dubey is likely to play this contest and if he does, he is one of the top picks for the day. Also, the team will hope that Ahlawat continues his good form here.

VCA Yellow will need to come forward to lead the team from the front. They have a good line-up but most of the players are struggling with form at the moment.

Wadkar has done an excellent job from behind the stumps. Since Dream11 offers points for catching too, it is good to go with him for the captain. He also has added useful runs to the total.

Pawar is a must-have pick in this contest. He might be a bit inconsistent but he can win matches single-handedly. His best performance came against VCA Red where he had 72 runs to his name.

Jagtap is likely to play this contest and if he does, he is an important pick here. In fact, he smashed a half century in his comeback century.

Aniruddha Choudhari has been a part of Dream11’s dream team in his last four matches. Additionally, in the contest against VCA Blue, he ended up smashing eight boundaries for his 40.

Taide is likely to lead the team from the front here. In the last contest, he had 106 runs with 12 fours and four fours to his name. He is likely to add more to that tally here.

Yash Kadam’s form has been outstanding in recent games. He has picked up two wickets, scored a half-century and had a cameo in his last four matches.

Head to head team for GRN vs YLW

Who Will Win Today Between GRN vs YLW Dream11 Prediction, Today’s Match ?

According to Kheltalk’s astrology GRN vs YLW Dream11 match Prediction, VCA Green will win the match. They will begin this contest as the favorites. They are one of the best teams in the competition. It is going to be difficult for VCA Yellow here.

According to Kheltalk’s GRN vs YLW Dream11 toss prediction, VCA Green will win the toss and opt to bat first. This is because they have a good number of spinners in the team and the pitch is on the slower side.