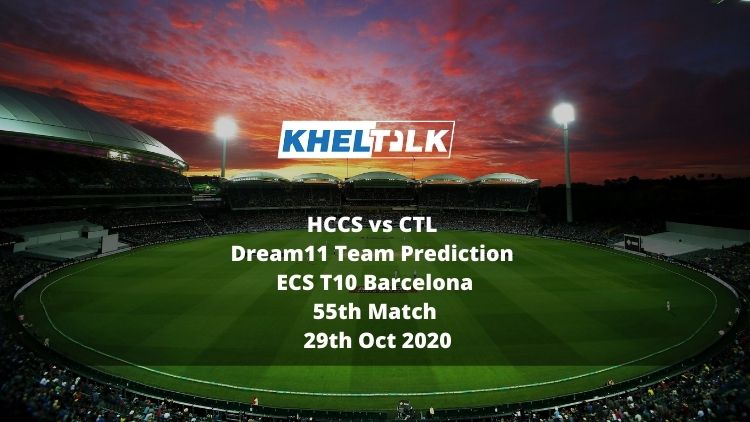 Catalunya CC and Hira CC Sabadell will look forward to locking horns in the next fixture of ECS T10 Barcelona 2020. CTL who have won five games in a row sits at the second spot on the points table, while HCCS has only one win in their pocket which makes them slip at the seventh spot. Here we have tried our best to provide you with the best HCCS vs CTL Dream11 Team Prediction, Top Captain & Vice-Captain Picks, Head to Head, Grand League, and Fantasy Tips.

Batsmen will enjoy staying on the crease, balls would come easily to the bat. Make sure, they play pacers carefully, else spinners would have to work hard at this surface.

Yasir Ali has scored 30, 56, 29 in the last two games for Catalunya, and can be impactful again. Also, he has five wickets in three games. He is the best choice as captain.

He is been consistent with the bat for Catalunya. In the last three games, he has scored 22, 46, 8 which helped the team to register a reasonable target for the opposition. He even bagged three wickets in the last game.

He has been economical with the ball and has three wickets from his last three games. He is capable of trouble batsmen and can chip important wickets at crucial times.

B Khalid can be another vice-captain choice as he has scored 24, 26, 6 in his last three games. Having an average of 25.2 in six games and a 193.59 strike rate. He can turn around things for his side.

HCCS vs CTL Dream11 Prediction: Who will win the match

Having won five back to back games, it will not be easy or will be nearly impossible for Hira CC Sabadell to kill the current winning momentum of Catalunya CC. So we bet CTL to notch a win here.