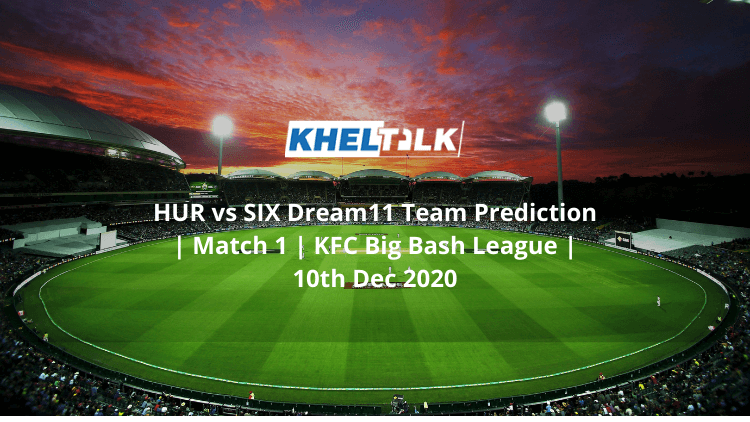 Cricket World is back with another jaw-dropping tournament BBL10. Now defending champions Sydney Sixers will lock horns with Hobart Hurricanes in the opening fixture of Big Bash League at Bellerive Oval in Hobart. Sixer will be without their regular skipper Moses Henriques as he is part of Australia’s‘ A’ squad which will play India in the tour game. They will even miss the likes of J Bird, S Abbott, and English all-rounder Tom Curran.

On the other hand, Hurricanes who were knocked out in the Eliminator last season will be without spinner S Lamichhane, who bagged 15 wickets for Melbourne Stars last season. David Malan and Keemo Paul will join the squad post-Christmas. Matthew Wade will also be missing as he is a part of the National Test squad. So, let’s go through our Dream11 Prediction for the upcoming Lanka Premier League game between HUR vs SIX.

It’s a fresh wicket so both bowlers, as well as batsmen, will have full support from the surface. Moreover, it’ll be a very good batting wicket.

J Phillipe was outstanding in the last season. Hitting 487 runs at an average of 37.46 with a strike rate of 129.86, he was the third-highest run-getter in the tournament. He even scored a half-century in the Finals.

D Short has a deadly strike rate of 143 and has a promising career in the BBL so far. He has scored 1209 runs in the past two BBL season. Not to forget, Short has smashed 250 runs at an average of 50 against the same opponent – Sixers.

Nathan Ellis was too convincing with the ball last season. He troubled a lot of batsmen on several occasions. He chipped 12 wickets in 15 BBL games last season and kept his economy under 8. Nathan Ellis can be impactful at the death overs.

S O’Keefe bagged seven wickets in the last season at an impressive economy rate of 6.92. You can rely on him as he can take the Sixers towards the glory.

HUR vs SIX Dream11 Prediction: Who will win the match

Sixers will step up as favorites in this game, having all three overseas talent, Henriques led side has a better line up on the papers as compared with Hurricanes. Our Dream11 Team Prediction experts have predicted a crucial and nail-biting encounter. However, we bet the Sixers to notch the game in the end.