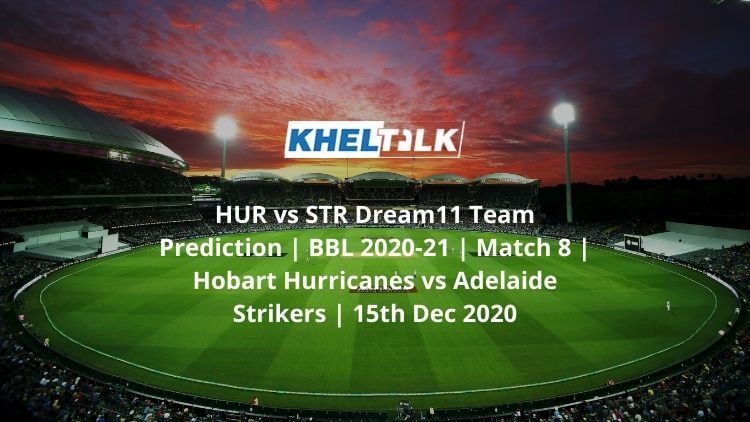 Hobart Hurricanes will take on Adelaide Strikers for the 2nd time in this year’s BBL. In the 1st match between these two teams, the Hurricanes pulled off a convincing win, defeated the Strikers by 11 runs. Short scored a brilliant half-century and with the ball, Faulkner did the initial damage and the team went on to win despite Worrall’s efforts in the end. Hurricanes are at the 2nd position currently with two wins from two matches while Strikers are at 5th position and have played only one match. Let’s go through our Dream11 Team Prediction for the upcoming BBL 2020-21 game between Hobart Hurricanes and Adelaide Strikers.

This will be the first match at Aurora Stadium, Launceston in the Big Bash League this year. Usually, this venue assists the batsmen more and the teams prefer chasing here. 186 is the par score at this venue.

D’Arcy Short is the most popular choice for the captain in the fantasy team. Short smashed 72 from 48 deliveries in his last match. He can also roll his arms for a few quick overs.

Colin Ingram began well in the last match but couldn’t convert the score to a fifty. He had 25 runs in the match. Earlier against the Sixers, Ingram smashed 55 from 42 deliveries with 7 fours and a six.

Rashid Khan was one of the stars in the previous year’s BBL where he took 19 wickets. Though he was a bit expensive in his last outing, this is a different venue and the conditions here suit him pretty well.

Daniel Worrall is likely to bat up the order in this contest after his fighting 62* in the last outing where everyone else failed. Also, Worrall will open the bowling for the Strikers.

HUR vs STR Dream11 Team Prediction: Who will win the match

Going by the form, Hobart Hurricanes are likely to win this contest as well. However, we cannot take Adelaide Strikers lightly. A lot depends on Peter Siddle and Rashid Khan when it comes to bowling. Also, the team will be hoping that Phil Salt scores at least a fifty here. Our Dream11 Team Prediction experts have predicted that it is going to be a close affair.