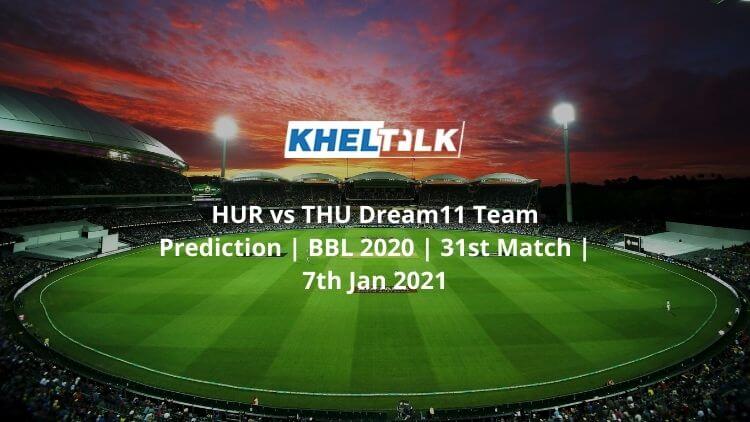 Hobart Hurricanes will take Sydney Thunder in the 31st match of the tournament. The match will be played at the Perth Stadium, a venue which will be new for both the teams this season.

However, this is not the first time that teams are playing at a neutral venue. Due to the coronavirus cases in Sydney, Thunder have played most of their matches in a neutral venue and the team has won 4 out of their six matches at neutral venues but their record at the Perth Stadium is a bit worrisome. The team has won only two matches from their last six outings at the venue while Hurricanes have won their last three outings here. Let’s go through the Dreaam11 Team Prediction for the upcoming Big Bash League 2020-21

Sydney Thunder is currently at 2nd position with 5 wins to their name and has 19 points. Hobart Hurricanes are just below them with 18 points. A win here can take both the teams to the number one position.

The conditions at the Perth Stadium will assist the batsmen more and the team usually prefers batting first at this venue because the wicket tends to get slower with time. Having said that, anything under 160 is easily chasable here.

Winners at this venue

Hobart Hurricanes will be coming into this match after a loss against the table-topper Melbourne Stars, but that wouldn’t bother them as much as the change in venues and the travel time. The team had to get to Perth real quick which might affect their performance here. Having said that, the players are all used to these, and this shouldn’t really affect them, well you will never know. Ben McDermott is currently the top-scorer of the tournament and also has the maximum number of sixes. The team has an excellent batting line-up, but their bowlers have let them down in a few occasions.

The team had recently suffered a blow as Daniel Sams will be missing this contest because of a concussion. The bowling all-rounder was hit by Wildermuth’s delivery. According to their bowling coach Shane Bond, Sams is doing alright and this is more of a precautionary measure. Still, Thunder is one of the strongest teams when it comes to the bowling department. The teenager Tanveer Sangha has been the stand-out performer with the ball. He has managed to remove some of the big names in the tournament including Chris Lynn, Andre Fletcher among others. Also, Alex Hales averages close to 55 against Hobart Hurricanes.

Ben McDermott is the leading run-scorer of the tournament at the moment. He has 277 runs from his 6 outings with a strike-rate close to 137.

Callum Ferguson will be looking to lead the team from the front. The Australian batsman has an average close to 41 here and has scored 243 so far.

Alex Hales is doing well in recent matches and has an excellent record against the Hurricanes. He averages 34.71 here while striking at 176.08. He has 243 runs so far.

Tanveer Sangha has picked up wickets at regular intervals and is the 2nd leading wicket-taker of the tournament at the moment. He has 13 wickets from 7 matches with an economy rate lesser than 7.5.

HUR vs THU Dream11 Team Prediction: Who will win the match

Both Hurricanes and Thunder are in good form and have done extremely well here. While the absence of Daniel Sams will affect the Thunder, they do have enough balance in the team to produce a good performance here. Having said that, the Hurricanes will be relying on Nathan Ellis to help the team stay in the hunt. Going by their head-to-head record so far, Hurricanes will begin this contest as the favorites as per our Dream11 Team Prediction experts.