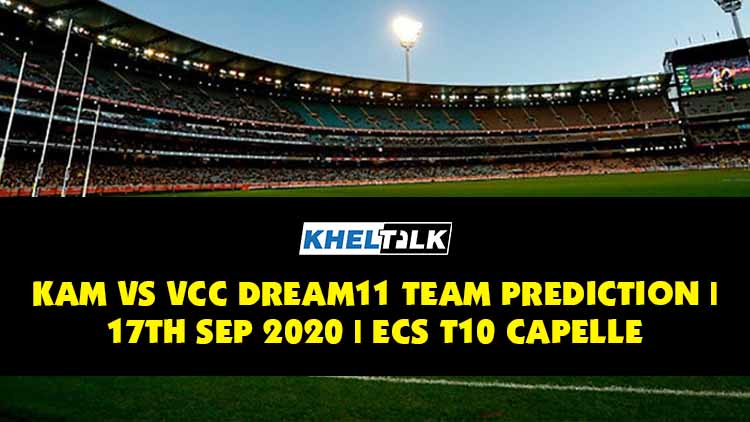 The third game of ECS T10, Capelle will be played between SV Kampong Cricket and Voorburg Cricket Club at Sportpark Bermweg Capelle. Both the teams didn’t get an expected start to their tournament as they suffered defeats against their respective opponents.

VCC lost to SPC by 8 wickets in their campaign opener. Meanwhile, KAM lost by a close margin of 8 runs. However, they both showed an intent to win the match and will be expected to come out with an impressive effort in the next game. For VCC, Bas de Leede and Aryan Dutt did an exciting work. Their form gives VCC an edge over KAM in the upcoming clash. On the other hand, KAM will rely on Ratha Alphonse and Faizan Bashir as far as their batting and bowling form is concerned.

All-Rounder: U. Malik, A. Saleemi, B. Saleem

He is the best choice we have with a 10.0 credit score. B de leede scored 67 runs off 32 balls in the previous game and he can be picked as the skipper for VCC.

He partnered B de Leede quite well in the campaign opener for his team. He smashed 48 runs off 28 balls studded with five boundaries and two sixes. His form makes him a perfect candidate for Dream11 Fantasy captain.

He finished as the top scorer for KAM in the match against SPC. He looked in good form and should not be ignored while picking Dream11 Fantasy Small league or Grand League team.

Bashir is an amazing bowler, who has shown his batting caliber in his previous appearance. He muscled 25 runs off 7 balls with the help of three boundaries and two sixes. So, he can also be appointed as the skipper of a Dream11 Fantasy team.

KAM vs VCC Dream11 Prediction: Who will win the match

VCC has a strong opening pair that made the mockery of the opponent bowlers in the previous match. They didn’t allow the opponent to take a single wicket. Their form makes VCC as the favorites to win the upcoming game ECS T10, Capelle. Moreover, their side looks more stable in comparison to that of KAM.