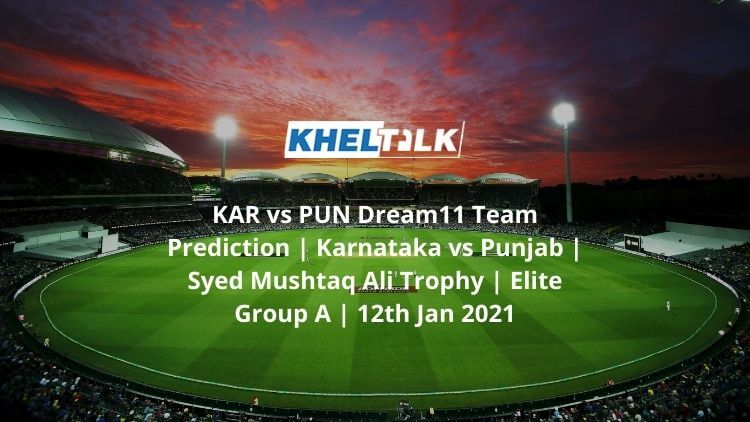 Elite Group A teams Karnataka and Punjab will lock horns in the next fixture of Syed Mushtaq Ali Trophy 2021. Both the teams will step up to play their second game in the tournament. Karnataka is coming after a win against Jammu and Kashmir in the opening game of the tournament, meanwhile, Punjab won against Uttar Pradesh by merely 11 runs. Let’s see which comes out of the pitch with the smiling face in the upcoming game. Let’s go through our Dream11 Team Prediction for the upcoming affair of NK vs WF in Super Smash 2020-21

A good batting track and having smaller boundaries is another advantage. Spinners will are expected to get some turn on the pitch. Team winning toss must opt to bat.

No changes are expected after an emphatic win. Top-order Devdutt Padikkat and Karun Nair will open the innings again, followed by Rohan Kadam and Pavan Deshpande. Wicket-keeper Shrijith will now be looking to hit a half-century after missing out in the previous game. They have a strong lower-order and bowlers did a neat job in the last game. They might miss the 6th bowling option but if their 5 bowlers perform with consistency then there is no issue.

Simran Singh smashed some much-needed runs in the powerplay but the other top order failed to impress with the bat. Gurkeerat Singh and Anmol Preet played a sensible inning in the middle order. Punjab’s main strength is the bowling department as they are stuffed with top-class IPL stars. Punjab can even try Mandeep Singh to open the innings as they lack consistency in the powerplay.

Devdutt Padikkal had an outstanding season last time out and also has an impressive debut in IPL by an Indian Player ever. Although, he missed to score runs in the previous game, but we know his ability, and is expected to perform against Punjab lethal bowling line up. In 15 IPL games, he has scored 473 runs and announced how talented he is.

Simran Singh showed his form and intent in the previous game. He smashed 43 runs off 41 balls to help his team reach a decent target on the board. He is expected to get more runs in upcoming games.

Siddharth Kaul was economical in the opening game and bagged two wickets for his side. Most importantly, he dismissed Rinku Singh who looked dangerous in the previous game. Don’t miss him out.

K Gowtham is known as a three-dimensional player and is capable of contributing with both bat and ball. He was lethal with the ball against JK and chipped two wickets for his side. He comes down the order and can help his team do late hitting.

KAR vs PUN Team11 Team Prediction: Who will win the match

Karnataka clearly is stronger on paper but Punjab’s bowling department can prove this wrong. But our  Dream11 Team Prediction experts believe that Karnatak will notch an easy victory here.