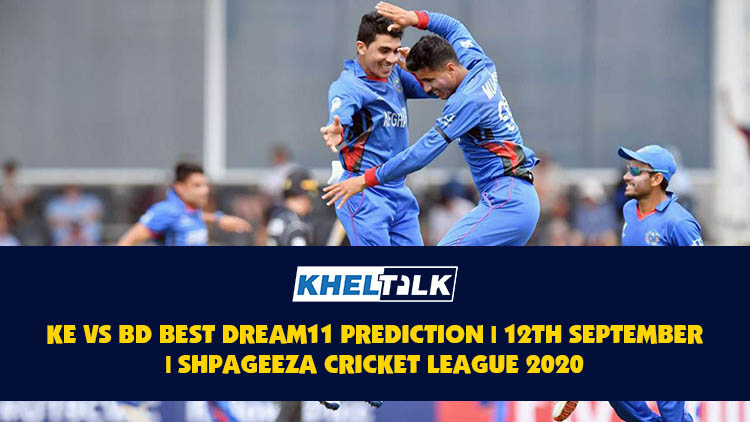 Kabul Eagles will be hoping to bounce back strongly when they lock horns with Band-e-Amir Dragons in the next KE vs BD fixture of the Shpageeza Cricket League 2020 at the Kabul International Stadium. Kicking off their tournament run with a defeat, Kabul Eagles worked on their mistakes and registered back to back wins in their last two games. With 2 wins and a loss, Eagles sit on the third spot of the points table. On the other hand, table topper Band-e-Amir Dragons would be highly satisfied with their performance in their recent games after losing their opening encounter by just one run against Mis Ainak Knights. They have three wins and a loss in their pocket.

“Check out our expert’s latest Cricket Betting Tips for today’s match in our detailed guide.

He is the leading run-scorer for Kabul Eagles. He has an average of 33.20 and a strike rate of nearly 141 in T20.Don’t hesitate to take him as your captain.

He along with A Afghan is batting tremendously for Dragons. They have scored 238 and 142 runs respectively in just 4 innings. With 9 wickets in 4 innings, S Ashraf leads the table in the bowling department.

He has 7 wickets in his pocket for Eagles. He can be really dangerous for Dragon’s batsmen. Don’t miss him out.

A. Afghan has scored 142 runs in the last four games for his team. His form makes him a perfect recipient for the vice-captain category in any Dream11 fantasy team.

KE vs BD Dream11 Prediction: Who will win the match:

It’s kind of tough to figure out who would exactly win this match. Both teams have been playing some impressive cricket lately but Dragons somehow are on the superior side. Their top-order batsmen seem more consistent with the bats and can really frustrate the opposition’s bowling department. So we play on Band-e-Amir Dragons.