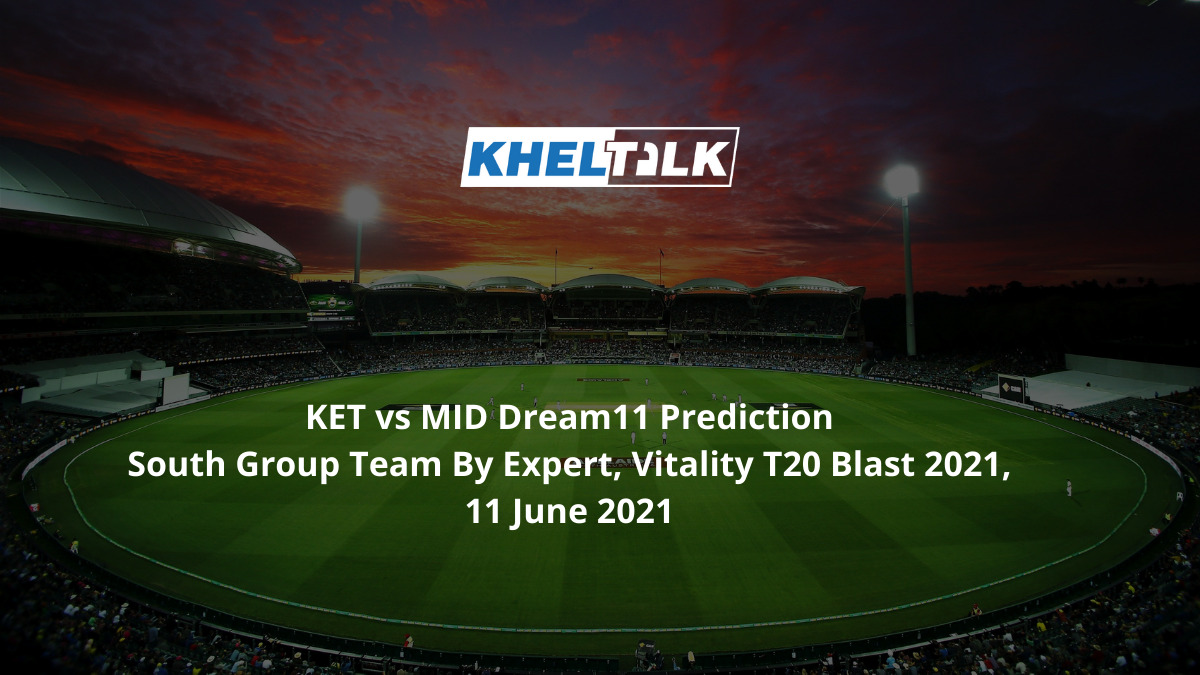 Welcome to KET vs MID Dream11 Prediction for Today’s Match Fantasy Cricket, Kent will take on the Middlesex in South Group Match of the Vitality Blast on Friday, June 11, 2021, at St Lawrence Ground, Canterbury, England, Taunton. Keep reading to find out about the Vitality Blast KET vs MID Match Dream11 team today.

Kent will take on Middlesex in their second match of the tournament. Both teams had a contrasting start as Kent went on to win their opening match while Middlesex went down.

Kent defeated Hampshire with ease, thanks to the bowling department who either returned economical or ended up grabbing wickets. Fred Klaassen led the bowling attack, had four wickets to this name, helped the team to crush Hampshire by 38 runs.

Middlesex, on the other hand, couldn’t handle Sussex. The latter crushed Middlesex by 54 runs. Middlesex bowler had a terrible day in the last match as they gave away 223 runs from their overs. In return, Sussex bowlers proved too good for the team.

Last year, Middlesex and Kent had two thrilling contest. Middlesex won their last match by two runs while the penultimate match ended in a tie.

The Canterbury ground had provided assistance to the pacers more than the spinners. Most of the teams here have preferred batting first because the conditions get slower with time. Even in the last match, Kent was able to defeat Hampshire with ease while batting first.

The conditions are going to be cloudy on Friday in Canterbury, according to the forecast. The temperature will be around 16 to 20 degrees Celcius for the most part of the day and will reach 24 degrees Celcius during the mid-day. There is a 7 per cent chance for rain as well.

The team will be missing out on some of the star players here because of the national duty but still, the team’s bench strength is just too good to be ignored. The skipper Daniel Bell Drummond, who was the leading run-scorer last year, will lead the team from the front once again and he will have the support of experienced Joe Denly.

The team will feature some of the prominent names in the form of Eoin Morgan, Steven Finn, Paul Stirling among others. The team, however, lacks depth when it comes to bowling which could be a concern once again here.

The England skipper Eoin Morgan needs no introduction. He had a decent start to the tournament where he had scored 32 runs from just 17 deliveries in the first outing. The knock had a couple of sixes and as many fours.

Paul Stirling fought hard to keep the team in the winning distance in the last match but he had no partners at the other end. It was unfortunate that he had to end on the other side of the result. Stirling made 58 from just 28 deliveries in his last match.

Daniel Bell-Drummond had managed to continue from where he had left off in the last edition. He smashed 44 from just 23 deliveries while opening the innings. He had four fours and a couple of sixes in the match.

Joe Denly’s experience will come in handy here once again. He was promoted up the order in the last match and it proved fruitful. He had 44 runs with six fours and a couple of sixes to his name. He will also open the bowling attack for the team here.

Ollie Robinson, the wicket-keeper, did well with the bat while batting at number three in the last match. He had 48 runs from just 36 deliveries there. Undoubtedly, a must-have pick here.

Fred Klaassen was the player of the match in the last match for his brilliance with the ball. He grabbed four wickets while giving away 32 runs from his four overs.

Who Will Win Today Between KET vs MID Dream11 Prediction, South Group?

According to Kheltalk’s astrology KET vs MID Dream11 match Prediction, Kent are likely to win this contest. The team will be keen to continue their winning momentum and also has a balanced squad compared to the Middlesex, which lacks depth in the bowling.

According to Kheltalk’s KET vs MID Dream11 toss prediction, Kent are likely to win the toss and opt for batting here. The team’s strength is their batting and thus, they will look to dominate right from ball one here.