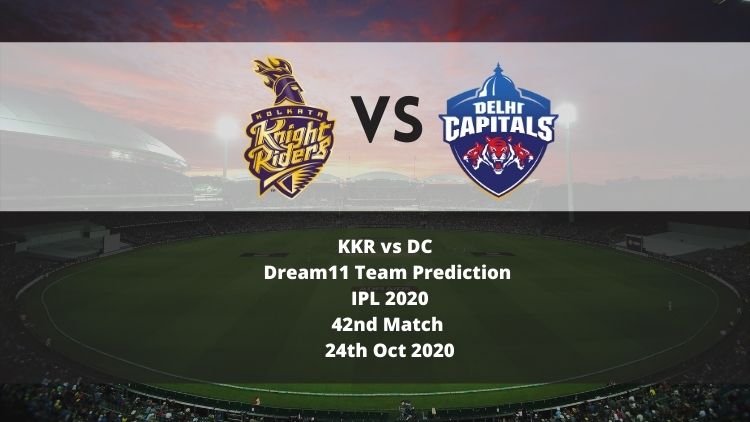 Table-toppers Delhi Capitals would square off against Kolkata Knight Riders in the 42nd fixture of ongoing IPL 2020. After witnessing an embarrassing defeat in the previous game, KKR would definitely learn from the mistake, but do not ponder over them. They still have the best chance to grab a fourth place at the points table, meanwhile, Delhi Capitals would work on their momentum revival after losing to KXIP in the previous game. The match is set to be played at Sheikh Zayed Stadium, Abu Dhabi, UAE So let’s look at our KKR vs DC Dream11 Team Prediction, Top Captain & Vice-Captain Picks, Head to Head, Grand League, and Fantasy Tips.

Head to Head for KKR vs DC:

If you have noticed, you would have seen that the surface at Abu Dhabi is getting slower day by day. Team winning toss must opt for bowling first as the chase gets a bit easier. Again, the weather will be warm around 35 degrees Celcius.

Back to back centuries have revived his form and has shown everyone he been nothing short of extraordinary. At present, he is sitting at the second spot of the highest run-scorer with 465 runs in 10 innings at an average of 66.42.

Shubhman Gill has been consistent with the bat for KKR. He is the highest run-scorer for KKR so far with 312 runs in 10 innings at an average of 34.66. Hitting the ball at a strike rate of 111.82, his highest score is unbeaten 70 runs.

Eoin Morgan can be a perfect choice as your vice-captain as he has got important runs for his side. Averaging at 40 along with a strike rate of 132.62, Morgan must not be kept aside.

K Rabada has been lucky to chip wickets throughout the tournament for Delhi Capitals. Currently, he is the purple cap holder and will not let his cap off his head. He has 21 wickets from 10 innings at an economy of 7.58.

KKR vs DC Dream11 Prediction: Who will win the match

We think DC would get back to winning momentum after its loss to KXIP. DC is stuffed with amazing bowling talents and will take full advantage of Abu Dhabi’s conditions. So we bet Delhi Capitals to notch a victory here.