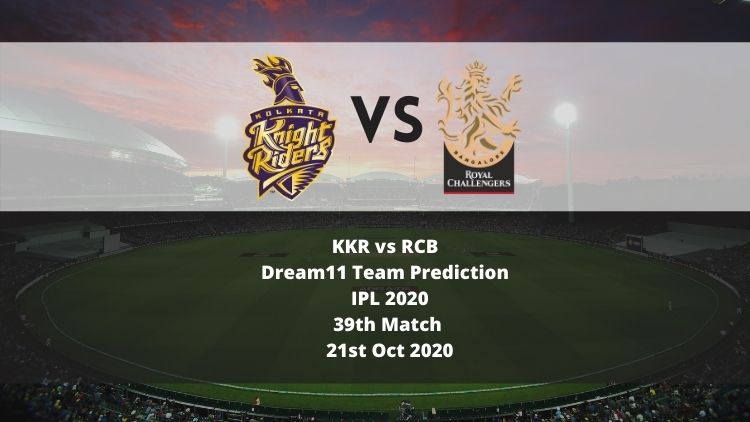 Kolkata Knight Riders registered a win in Super Over against Sunrisers Hyderabad and grabbed a couple of points in the previous game. Lockie Ferguson was awarded Man of The Match. He took three-for in the match along with 2 wickets in the Tei-Breaking Super Over. KKR will be filled with confidence and try to replicate the same against RCB. On the other hand, RCB looks like a settled squad with players performing well in their respective departments. And, there is no reason why they will lose a game against KKR. Virat Kohli and Co. are very close to qualifying for the playoffs and will look to come out with their best. So let’s look at our KKR vs RCB Dream11 Team Prediction, Top Captain & Vice-Captain Picks, Head to Head, Grand League, and Fantasy Tips.

Head to Head for KKR vs RCB:

The tracks are getting slower with each passing game and batsmen are finding hard to score runs with the bat. Meanwhile, the spinners and fast-bowlers are dominating in the games. The same trend is expected to be followed in the next match. Anything between 150 and 160 will be easily defendable at this venue.

It is very obvious to pick Virat Kohli as the skipper of the Dream11 Fantasy team. He is in smashing form and scoring runs when his team needs it. And, on a difficult and bowling friendly wicket, he will be the perfect player to pick.

AB de Villiers is certainly turning the tables for RCB in this edition. He has notched some quickfire knocks in IPL 2020. In the previous game, de Villiers single-handedly won the game for his team against Rajasthan Royals. Now, he will be up for another scintillating performance in the next encounter.

Karthik has shown some glimpse of his good form with the bat. After stepping down from captaincy, he has got the license to go out and express himself in the best possible way. And, there are chances that he will click his best IPL 2020 knock against RCB.

Eoin Morgan hasn’t got a big knock in IPL 2020. But, he is well capable of scoring runs with a remarkable strike-rate. And, he might unleash his best against Royal Challengers Bangalore.

KKR vs RCB Dream11 Prediction: Who will win the match

We have picked Kolkata Knight Riders as the probable winners for the next IPL 2020 game. It is well known that the odds are against Knight Riders. But, their side will look to give their best in the upcoming game and outclass RCB. Moreover, the return of Sunil Narine will give much-needed stability to the side. The wickets will be spin-friendly and they have some premium spin heads in their side.