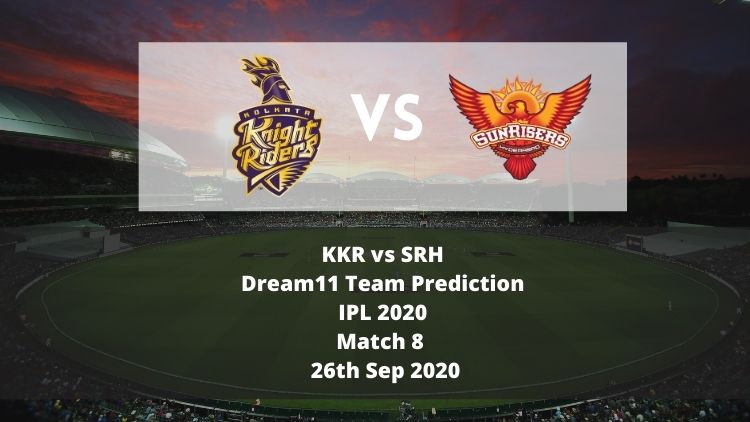 The 8th fixture of IPL 2020 will be played between Kolkata Knight Riders and Sunrisers Hyderabad. Well, both the teams faced defeat in their opening clash to MI and RCB respectively. Now they both are expected to bounce back strong after looking rusty in their opening game. The match is scheduled to be played at Sheikh Zayed Stadium, Abu Dhabi.

The surface at Abu Dhabi has been treating batsmen really well, but it will definitely offer some assistance to the seamers. The weather would surely make players sweat because of 40 degrees Celcius.

You can check out the latest IPL Updates & News here

David Warner loves to play against the Knight Riders. The Aussie opener has a few centuries which helped him to notched 829 runs from 21 innings at an impressive average of 43.63. His highest score against KKR is 126.

Kuldeep Yadav must be your pick as he has bagged most wickets against Sunrisers itself. Bowling almost 30 over, he has picked 10 wickets at an economy of 7.80. The chinaman can really be lethal with the ball to collapse the SRH batting line up.

Coming at the top Jonny Bairstow can be an asset to his team as he can turn around things with his hitting and provide a solid platform to lower down the order. He scored 61 runs off 43 balls against RCB. Don’t miss him out.

Andre Russell has been as x-factor player for KKR. With his tremendous destructive batting skill, he can make bowlers cry out loud. He can influential with the ball as well. Narine can also be your choice as he can be impactful with bat and ball both. He has got David Warner and Jonny Bairstow with his twist and turns on many occasions.

KKR vs SRH Dream11 Prediction: Who will win the match:

KKR clearly stands ahead comparing SRH. Hyderabad seems a bit weak in batting depth as KKR is filled with the likes of Russell and Eoin Morgan. Another advantage for KKR is that they have played at this venue, so we bet of KKR to win the encounter.