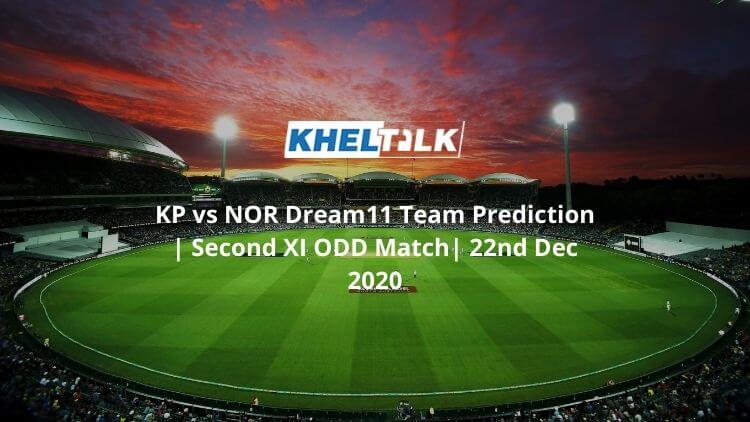 Khyber Pakhtunkhwa will now take on Northern at the National Bank of Pakistan Sports Complex in Karachi in the 12 fixtures of the Pakistan Cup Second XI Trophy. Both the teams have won only a single game so far in the league. Talking about Khyber Pakhtunkhwa, they lost their first two games, but bounced back strong against Balochistan and registered a 126 runs victory. On the other hand, the Northerns also lost their first two games, but finally opened their account beating Southern Punjab in their last outing. Let’s go through our KP vs NOR Dream11 Team Prediction for the upcoming game between KP vs NOR.

The conditions at the National Bank of Pakistan Sports complex have been neutral but there will be some advantage to the spinners in the second innings. Pacers will enjoy initially, also batsmen will find it easy to score runs later.

KP vs NOR Dream11 Team News:

Khyber Pakhtunkhwa is likely to step with their winning combination. No changes are expected for this game. S Farhan and M Arif will form a pair to open the innings for the side, while M Haris (Wicketkeeper) and A Afridi will follow them at numbers 3 and 4.

Captain Asif Afridi, Maaz Sadawat, and M Ibrahim had a great outing in the previous game and are expected to do wonders once again. They will perform late hitting show for the side.

M Imran, A Rauf, and M Amir Khan will do everything possible to trouble the batsmen with their variations. Spinners will have an advantage in the second inning.

Northerns will also not tinker with their winning combination after winning their previous game against Southern Punjab by 1 wicket. K Iqbal and N Malik will again step up to open the innings, but hopefully, they set up some great start for the side.

Shoaib Ahmed and Abdul Faseeh have been doing good with the bat and are likely to be in form. Umar Waheed was outstanding in the previous game as he smashed 72 crucial runs to help his team reaching glory.

He will against form a strong middle order alongside, skipper Sohail Akhtar and U Masood. Salman Irshad, M Mumtaz will keep the bowling department in their hand. Don’t forget Ameer Jamal, he bagged five wickets in the last game. Don’t miss him out.

KP vs NOR Dream11 Prediction, Line-Ups:

Wicket-keeper: U Waheed, U Masood

Captain Pick for KP vs NOR  Dream11 Team

Umer Waheed played a sensible inning in the last match where he smashed 72 runs of 71 balls including 4 fours and a six. Don’t miss him out as he looks in good touch and is likely to continue his brilliant form. He will be a perfect player to pick from KP vs NOR Dream11 Team Prediction.

Ameer Jamal will be having all the eyes in tomorrow’s clash. He was exceptional with the ball in the last game as he bagged five wickets to help his team find the glory.

Khyber Skipper Asif Afridi has got wickets in the last two games and has been adding runs off his bat as well. He can play a crucial role in the upcoming game.

Salman Irshad has lept his economy under 6 for Northern. He has chipped 7 wickets in the last three matches and good in formidable form. The skipper will have a lot of expectations from him.

Top four Picks For KP vs NOR Dream11 Team:

KP vs NOR  Dream11 Team Prediction: Who will win the match

so far, scoring runs hasn’t been easy in this tournament. All-Rounders have shown skills and are important for your fantasy perspective. Northern 2nd XI has a better lineup and is the favorite for this match. Our KP vs NOR Dream11 Prediction experts expect it to be a nail-biting encounter but in the end, Northerns will notch a victory here.