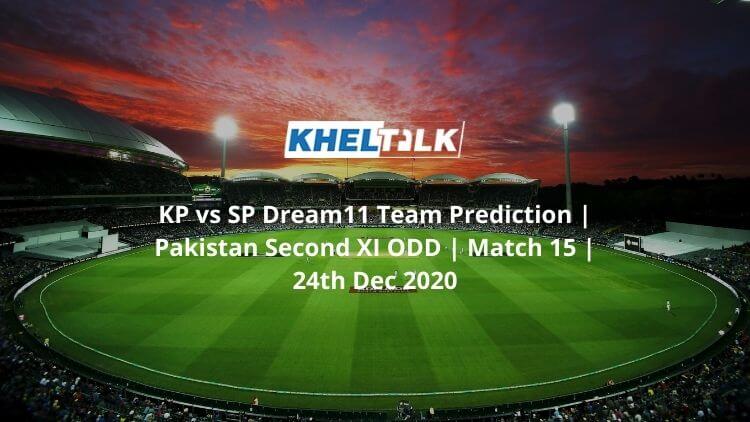 Both the teams are coming into this match after a comfortable victory in their previous outing. Khyber Pakhtunkhwa defeated Northern by 6 wickets while Southern Punjab reduced Central Punjab to just 92 and chased the total with ease. Let’s go through our KP vs SP Dream11 Team Prediction for the upcoming affair.

Going by the matches in the tournament, the pitch seems like a decent one to bat as all the teams have managed to reach 210 with ease. Also, the conditions don’t really change in the 2nd innings and anything below 230 can be chasable.

Total matches played at this venue- 4

Khyber Pakhtunkhwa is one of the balanced squads in the tournament and a loss depends on Mohammad Imran and Mohammad Amir Khan. The duo will open the bowling for the team and in the last match, they shared 7 wickets between them.

The team has done well, thanks to their bowlers who have managed to rip off the batting order of the opponents. Irfan has led the pace attack very well and a lot depends on Salahuddin as well. The team’s keeper Waqar Hussain has been the stand-out performer and has scored three fifties in the tournament so far.

Mukhtar Ahmed has contributed both with bat and ball and is one of the top performers here. He has 4 wickets to his name and has scored 223 runs here.

Waqar Hussain averages 73 in the tournament so far. He has 219 runs with a best of 73. He also has contributed behind the stumps.

Mohammad Amir Khan has played only 3 matches but is already the best bowler in the tournament. He has 10 wickets so far with the best of 5 for 54.

Sahibzada Farhan is the leading run-scorer of the tournament at the moment. He has 227 runs with three half-centuries to his name.

KP vs SP Team11 Team Prediction: Who will win the match

The team SP will begin this contest as the favorites as the team has done well compared to the team KP. For KP, a lot depends on their bowlers who haven’t really fired compared to their batsmen. On the whole, this match should be an exciting contest. But, as per our experts for KP vs SP Dream11 Team Prediction they have given preference to SP.