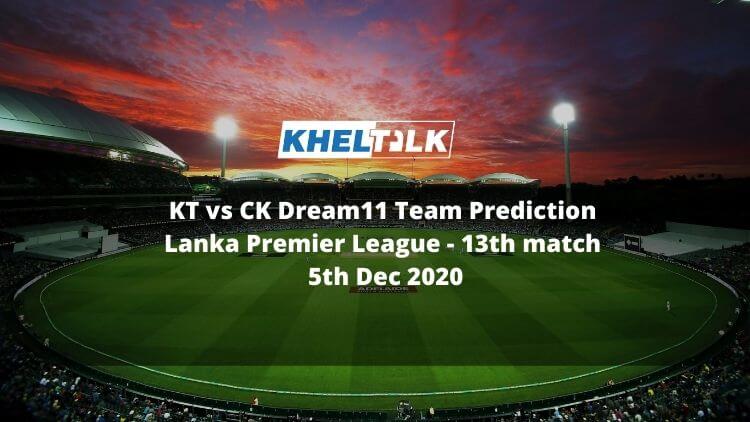 Colombo Kings will take on Kandy Tuskers in the 13th match of the tournament. Colombo Kings have played only three matches so far and have won two of them. A win here most likely will take them to the 2nd position in the points table. On the other hand, Kandy Tuskers have played 5 matches and have managed to win only one match. Their win came against Galle Gladiators who are at the bottom position in the table. When these two teams met earlier in the tournament, the match went on to the super over and Colombo Kings won the match in the eliminator. Let’s go through our Dream11 Team Prediction for the upcoming game between Colombo Kings and Kandy Tuskers.

The conditions will assist the batsmen more and the team batting first will have the upper hand. While batting first at this venue seems easier, the teams batting second have struggled comparatively.

Dinesh Chandimal has been good with the bat. He has 80 runs from his 2 innings with a strike-rate close to 171.

Kusal Mendis is one of the top scorers in the tournament. He averages 47 and has 188 runs with a strike-rate close to 141.

Gunaratne has contributed both with bat and ball. He has 96 runs with the bat and has also picked up 7 wickets at an economy rate lesser of 8.

Isuru Udana is one of the popular picks for the captain in the fantasy side. He so far has 3 wickets to his name. When these two teams met earlier in the tournament, He smashed 34 runs and the knock had 4 big sixes.

KT vs CK Team11 Team Prediction: Who will win the match

Though we Colombo Kings are the favorites to win this match, we can expect a close contest, something similar to the inaugural match of the tournament. Our Dream11 Team Predictions experts feel it is going to be a close encounter between Colombo Kings and Kandy Tuskers.