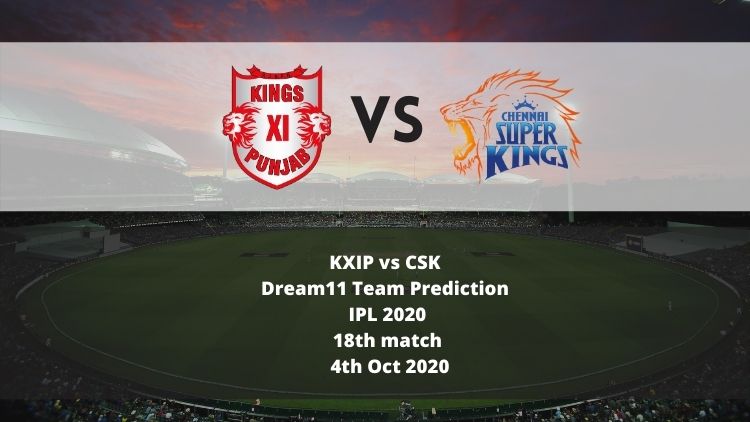 Chennai SuperKings take on the Kings XI Punjab in the 18th match of the Indian Premier League in Dubai. Mumbai have won two of three matches while SRH has won two and lost two games. Both sides have won their last match and are in a good rhythm. Both the teams have lost their previous games and are desperately searching for wins. Punjab have won one and lost three games while CSK too has won only one match and lost three games. Let’s go through our KXIP vs CSK Dream11 Team Prediction, Captain & Vice-Captain Picks, Fantasy Tips, and Best Fantasy team for KXIP vs CSK

Head to Head KXIP vs CSK:

Dubai is a bat-first pitch. No team has won while chasing a target in seven games here in IPL so far. The pitch gets slower in the second innings and isn’t an ideal one to play shots.

The Punjab wicket-keeper and skipper is a fantastic form. He has scored a hundred and a fifty in his last three innings (17, 69, and 132*).

The leading run-scorer in IPL, Agarwal has scored 246 runs in four games. He scored 106 runs against Rajasthan Royals.

Bravo is CSK’s designated death overs bowler and a genuine wicket-taker. He has a strike-rate of 17.9 in T20s and experience of 466 games.

KXIP vs CSK Dream11 Prediction: Who will win the match

Kings XI have looked a different team in the death overs. They have lost all their three games in the death overs. But for most parts, they have done really well. CSK on the other hand doesn’t have the proper arsenal to exploit Punjab’s weakness. So expect Punjab to win this contest.