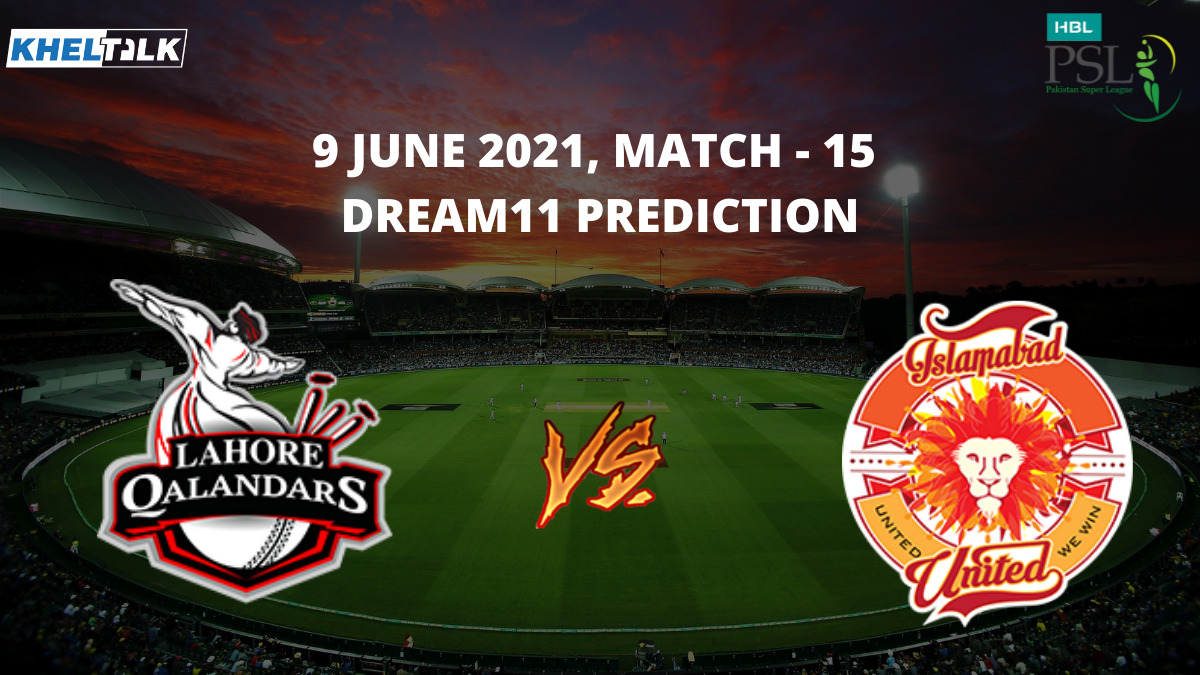 Welcome to LAH vs ISL Dream11 Prediction for Today’s Match Fantasy Cricket. Lahore Qalandars will take on Islamabad United in Match 15 of the PSL 2021 on Wednesday, June 9, 2021, at the Sheikh Zayed Stadium, Abu Dhabi. Keep reading to find out about the Match 15 LAH vs ISL Dream11 team today.

The Pakistan Super League which was suspended months ago due to the pandemic will resume from Wednesday with Lahore taking on Islamabad. The match will take place in Abu Dhabi. During this gap, a lot of players have withdrawn from the tournament and their replacements have been announced as well.

Lahore has added seven players to their team as a mini replacement. The spin wizard Rashid Khan will feature in the team which is certainly a big buy for the team.

On the other hand, Islamabad will miss out on the services of Alex Hales among others. However, the team has a good backup in the name of Usman Khawaja.

Talking about the tournament so far, Lahore has won three out of their four matches but are in the 4th position because of their net run-rate. On the other hand, Islamabad is just above Lahore in the points table as the team has a better run rate.

The pitch at Abu Dhabi is sticky and slow. They help the spinners more. Going by numbers, the teams batting second have won more matches. In 33 matches, 19 matches were won by the team batting second. The highest score at this venue is 205 by Chennai Super Kings and the average first innings total is 157.

The team will miss out on Ben Dunk who recently went down the knife. However, the team does have enough power to beat any team. Rashid Khan among others will enjoy bowling at this venue. Apart from obvious choices, Salman Ali Agha is likely to dominate here.

The biggest loss for the team is the unavailability of Alex Hales. However, they do have a strong batting line-up, thanks to the presence of Colin Munro. The team now has added experienced players like Usman Khawaja who can bring in some good fortune for the team.

Usman Khawaja is in good form at the moment and can prove vital in this contest. In his last four domestic matches, he had scored two fifty-plus scores and in T20s, he has 2632 runs from his 97 innings with a strike rate close to 128.

Fakhar Zaman is coming into the tournament after a decent series against South Africa where he had 60 runs to his name. In the PSL 2021 so far, He is the leading run-scorer for his team with 189 runs from 4 innings. He has a strike rate close to 144.

Shaheen Afridi had ten wickets in his last four innings against Zimbabwe in Test and it includes a fifer. Afridi is having a decent year at the moment and in the PSL 2021 so far, he is the 2nd leading wicket-taker with 9 wickets with an economy rate of 7.06.

Mohammad Hafeez could be the difference between the two teams today. The stalwart is likely to bat up the order here and in the PSL 2021, he so far has 181 runs from his 4 innings with an average close to 90.50 while striking at 175.72.

Rashid Khan needs no introduction. He is likely to play in this game and if he does, he is undoubtedly a must-have pick. In his last four T20 matches, he has picked up six wickets with the best of 3 for 36. On the whole, he has picked up 360 wickets.

Colin Munro is yet another player to watch out for here. The New Zealand opener is just a few runs away from his 7000 T20 runs. He recently played for the Scorchers where he scored 443 runs from his 15 innings.

Who Will Win Today Between LAH vs ISL Dream11 Prediction, Match 15?

According to Kheltalk’s astrology LAH vs ISL Dream11 match Prediction, Islamabad United is likely to start as underdogs here. The team does have good options here but Lahore is likely to win this match because of the presence of some of the experienced T20 campaigners. All eyes will be on Rashid Khan.

According to Kheltalk’s LAH vs ISL Dream11 toss prediction, ISL is likely to win the toss here. They are likely to opt for chasing as according to the pitch report, most matches are won by the team batting second.