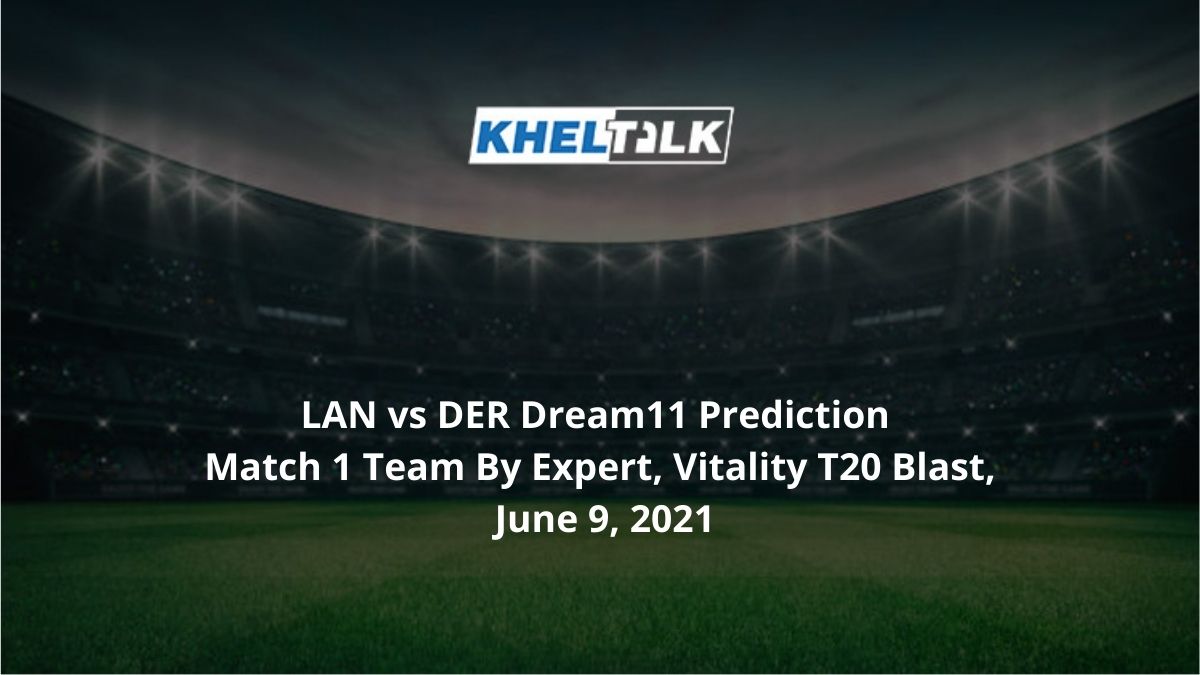 Welcome to LAN vs DER Dream11 Prediction for Today’s Match Fantasy Cricket. Lancashire will take on Derbyshire in Match 1 of the Vitality T20 Blast on Wednesday, June 9, 2021, at the Old Trafford, Manchester. Keep reading to find out about the Match 1 LAN vs DER Dream11 team today.

Lancashire will take on Derbyshire in the first match of the North Group in the Vitality T20 Blast which begins on Wednesday. Lancashire will be keen to add more titles to their tally. They have won the tournament only once in 2015 and had ended up in the semi-finals twice recently and in the 2019 edition, they got to the Quarter-final. We can expect them to reach at least the Quarters in this time as well.

Derbyshire, on the other hand, had a poor outing last year, ended in the 6th spot with seven losses to their name. The 2019 finalists will be keen to bounce back here and they do have a good balance on papers. All eyes will be on the youngster Ben McDermott who made heads turn during the BBL while playing for the Hurricanes.

The pitch at Old Trafford has been batting-friendly. Most teams have preferred bowling first here. So far, in the Men’s domestic T20s, most of the matches were won by the team batting first. Out of 41 matches, the batting team has won 25. The average first innings score at this venue is 162 and the highest score at this venue is 231 by Lancashire.

Since this is a batters’ ally, it’s good to go with more batters and all-rounders who can fetch us more points. Alex Davies, Finn Allen Ben McDermott, Jos Buttler are some of the popular picks in the contest.

Alex Davies has been the team’s leading run-scorer for a while now. This time, he will have the support of Finn Allen, who turned heads during the Super Smash and for New Zealand as well. Matt Parkinson will be leading the bowling attack for the team here.

Led by Alex Hughes, the team depends more on young faces. Ben McDermott will be the player to watch out for here, after his Hurricanes stint. Also, the team will fancy their chances by allowing 22-year-old Samuel Conners to take the new ball.

Liam Livingstone is likely to play in this contest. The all-rounder will lead the batting attack for the team and is likely to open the batting for them. Last year, he had 192 runs from his seven outings with a strike rate close to 157 runs.

Jos Buttler needs no introduction. The England keeper will feature in this contest which is a huge boost for the team. Buttler averages close to 40 for Lancashire in T20s and has scored 1057 runs from his 35 outings. He has 11 fifties for the team.

Finn Allen was outstanding in the domestic tournament for New Zealand and his performances earned him a place in the New Zealand team. The aggressive batter proved his worth there as well by taking on Bangladesh. In T20Is, Allen has 88 runs with a strike rate close to 221.

The experienced Keaton Jennings will play a major role in this contest. He is in good form at the moment. He has scored four 60-plus scores in his last seven matches, which includes a massive 114 as well. In fact, the ton came in the same venue.

Mark Parkinson was the leading wicket-taker for his team in the last edition and he is the one to watch out for here. He recently came up with the ball of the century during his county stint, something too good to be ignored.

Wayne Madsen was the leading run-scorer for Derbyshire and all eyes will be on him here. He scored 192 runs with an average close to 26.

Who Will Win Today Between LAN vs DER Dream11 Prediction, Match 1?

According to Kheltalk’s astrology LAN vs DER Dream11 match Prediction, Lancashire will begin this contest as favorites. The team will feature some of the international players including Jos Buttler and since they are in good form at the moment, one can expect them to dominate here.

According to Kheltalk’s LAN vs DER Dream11 toss prediction, Lancashire is likely to bat first at this venue. Since they have a strong batting line-up, they might look to put on a high total. Also, Lancashire has a good record while batting first here.