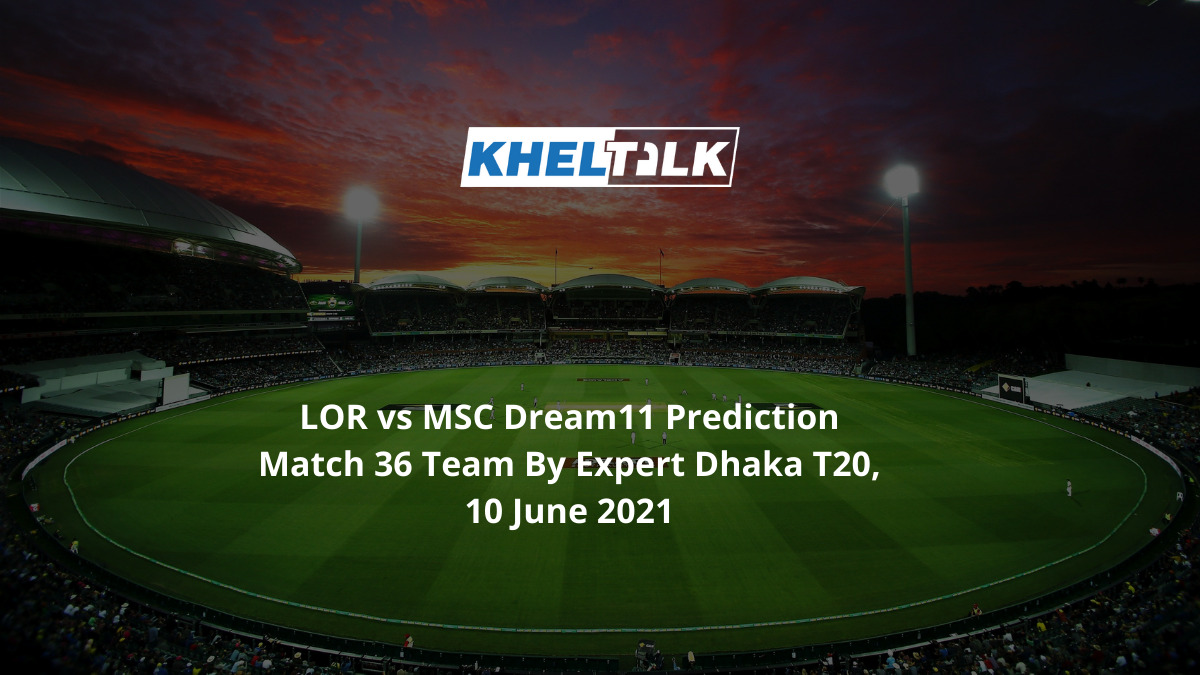 Welcome to LOR vs MSC Dream11 Prediction for Today’s Match Fantasy Cricket. Legends of Rupganj will take on Mohammedan Sporting Club in Match 36 of the Dhaka T20 on Thursday, June 10, 2021, at the Shere Bangla National Stadium, Mirpur, Dhaka. Keep reading to find out about the Match 36 LOR vs MSC Dream11 team today.

Legends of Rupganj are in the bottom half of the table and are in need of a win here. They have won only one match out of their five and have lost three of them. One match was washed off due to rain. Their only win came against Shinepukur Cricket Club. The latter fell 14 runs short while chasing 82 runs from 12 overs.

Mohammedan Sporting Club has won three out of their five matches and have lost two matches. In fact, the team is coming into this contest after losing the last two games. They are currently in the fifth spot and a win here will take them to the fourth spot.

This is a good pitch to bat on compared to other venues here. The average first innings total so far is 141 at this venue and most of the teams have managed to score 140-mark with ease so far. The team batting second have won 10 out of the 18 matches so far at this venue.

The team has a good batting depth but is struggling when it comes to bowling. Also, they are yet to find the right combination and one can expect a couple of changes in this contest.

The team began the tournament well with three wins in a row but have lost their last two matches and are in desperate need of a win here to bounce back. The team has a good line-up and the presence of international players like Shakib Al Hasan has increased their chance of winning the tournament more.

Sabbir Rahman is yet to perform big here but has managed to score cameos on multiple occasions. He so far has scored 80 runs from his four innings. He has four fours and a couple of sixes to this name. He also has managed to pick up a wicket.

Shakib Al Hasan has been the star performer with the ball for the team. The stalwart has picked up eight wickets so far while giving away just 6.38 runs per over. He also has managed to score 73 runs with the best of 29.

Parvez Hossain Emon is in decent form with the bat and has recently scored a fifty. He so far has 106 runs from his five innings and has managed to score seven fours and as many sixes. He is likely to bowl a few overs here.

Mahmudul Hasan has been consistent with the bat throughout the tournament. We can expect a good cameo from him today. He so far has scored 74 runs from his four innings with the best of 38. He has scored eight fours and three sixes here.

Nadif Chowdhury is a must-have pick here. He is the leading run-scorer for his team and is likely to dominate with the bat. He averages close to 42. He so far has 124 runs with the best of 57 runs.

Abu Jayed has been consistent with the ball and is the 2nd leading wicket-taker for the team at the moment. He has picked up seven wickets so far while giving away 6.88 runs per over.

Who Will Win Today Between LOR vs MSC Dream11 Prediction, Match 36?

According to Kheltalk’s astrology LOR vs MSC  Dream11 match Prediction, Team MSC is likely to win this contest. The team will be looking to bounce back here after losing their last two matches. Also, on paper, they are the better team compared to team LOR.