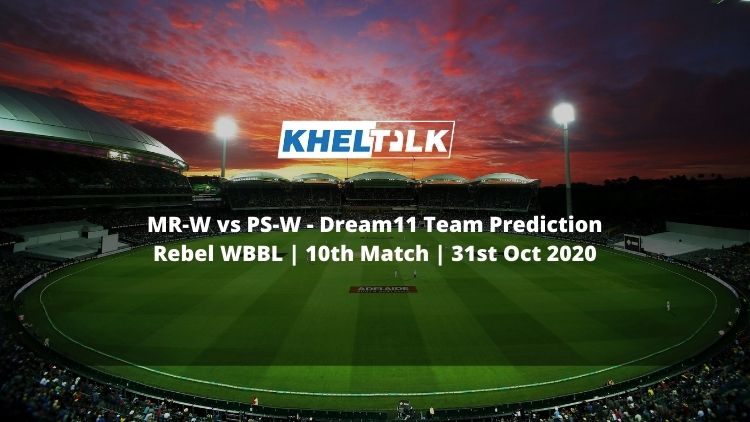 The 10th fixture of Rebel WBBL will be played between Melbourne Renegades and Perth Scorchers at Drummoyne Oval, Sydney, Australia on 31st October. Melbourne both matches were washed out due to rain and now they would be eager to add two points to their name. On the other hand, Perth Scorchers have lost their opening game to Brisbane Heat and will be looking forward to bouncing back strong. Today, we are here for its Dream11 Team Prediction. So let’s have a look at our MR-W vs PS-W Dream11 Team Prediction, Top Captain & Vice-Captain Picks, Head to Head, Grand League, and Fantasy Tips.

It will be interesting to see how the Drummoyne surface would behave this season. Scheduled for 10 games, the pitch is expected to be slow by the end. But, initially, we might see high scores as the ball should come nicely to the bat. The team batting first might achieve a total of about 165-175.

S Devine who played last season for Adelaide Strikers was exceptional with the bat in 2019 edition. Playing 16 games, she scored 769 runs at an average of 76.90 and at a strike rate of 130.33 including 9 fifties. Don’t miss her out.

M Strano was the highest wicket-taker for Melbourne Renegades. She chipped 24 wickets in 15 matches at an economy of 7.40. Her best figure last season was 4/28. You cannot afford to lose her.

A Jones scored 391 runs from 13 innings for Perth Scorcher last season at an average of 32.58 along with three fifties. She is capable of hitting big sixes and can even rotate strikes when needed. Favorable choice as vice-captain.

M Brown was eye soothing with the ball last season. Playing 15 matches, she bagged 16 wickets at an economy of 7.32 with the best figure of 3/22.

MR-W vs PS-W Dream11 Prediction: Who will win the match

It just the starting phase of the tournament and teams are back in action after a long time. Like Perth, Renegades might even taste defeat in their first complete match. Perth would step up thinking of showcasing a better performance as they have a much-balanced side than Renegades. So we bet on Perth Scorchers to notch a victory here.