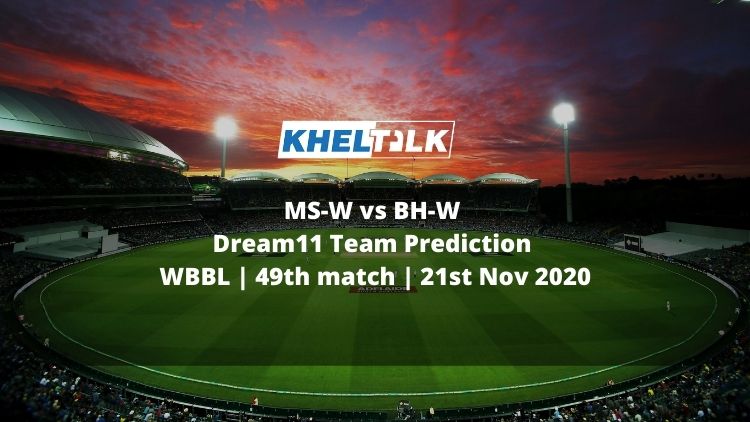 It is the clash of the Titans in the WBBL as the two top teams of the tournament, Melbourne Stars and Brisbane Heat lock horns with each other. Melbourne is placed at the top of the points table with 8 wins in 12 games while Brisbane has won 6 of their 12 games.

The wickets have been a bit slow lately in this tournament and expect the same in this match too. However as this is the first game after a break, the wicket will be fresh and thus it will aid batters.

with 16 wickets, N Sciver has been the best bowler for her team by a big margin. She has claimed wickets whenever the team needed and her strike-rate of 10.8 shows she is a genuine wicket-taker. Importantly she hasn’t gone wicket-less in the last 6 innings she has bowled in. She has also contributed with the bat and has scored 129 runs at an average of 32.25 and strike-rate of 119.44.

J Jonassen is one of the architects of Brisbane’s successful campaign in WBBL so far. By taking 14 wickets in 11 innings, she has led the bowling arsenal from the front and she has an impressive strike-rate of 15.8 with the ball. She has been more than handy with the bat too and has scored 161 runs in 10 innings.

The run machine for Melbourne, M Lanning has been unstoppable with the bat. She has scored 381 runs so far at an average of 47.62 and has a rike-rate of 129.15. Importantly she has scored 5 fifties in her 10 innings She has scored one fifty in the last 3 innings.

As this is the game between the top two teams, expect a close contest. However courtesy of their strong batting order, Melbourne will win this game.