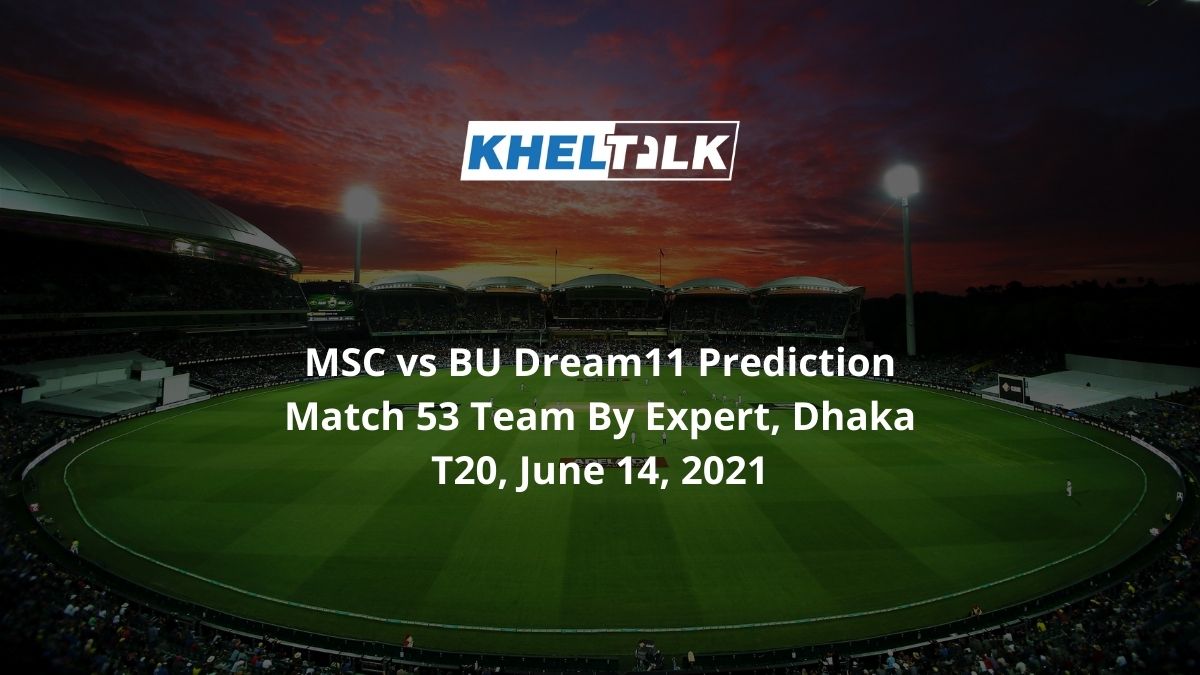 Welcome to MSC vs BU Dream11 Prediction for Today’s Match Fantasy Cricket. Brothers’ Union will take on Mohammedan Sporting Club in Match 53 of the Dhaka T20 on Monday, June 14, 2021, at the Bangladesh Krira Shikkha Protisthan No 4 Ground, Savar. Keep reading to find out about the Match 53 MSC vs BU Dream11 team today.

Both Mohammedan Sporting Club and Brothers Union are having a decent tournament so far. The team MSC have won five out of their eight contest and are currently at the fourth position in the points table. They began the tournament with three wins in a row before losing as many matches. However, they have found their track at the moment and have won the last match.

On the other hand, Brothers Union are in desperate need of a win here. They have lost a couple of matches in a row now and have won three matches in total from their seven outings. One of their matches was abandoned due to rain. Interestingly, both teams have won their last contest at this venue.

Rain is on cards on Monday in Bangladesh. According to the forecast, there is a 80 per cent chance of rains which means there is a huge chance that this match will be affected by the same. The temperature will be around 31 degrees Celcius.

After a couple of losses, the team had bounced back to win their last outing and will look to continue the same here. However, the team will miss out on Shakib Al Hasan who has been banned for his on-field behaviour.

The team will begin this contest as underdogs but they do have a good chance of winning this contest because of the absence of Shakib Al Hasan. The team will be hoping that Zahiduzzaman comes good today as he was the star performer in the team’s wins recently.

Shuvagata Hom has a huge role to play in this contest, especially, due to the absence of Shakib Al Hasan. He so far has done well with the ball to pick up six wickets and also has managed to score 76 runs with the best of 52.

Abu Jayed has been outstanding with the ball so far and is likely to dominate here as well. He so far has picked up eight wickets while giving away 6.95 runs per over. He has the best of 3 for 33 and is useful with the bat too.

Alauddin Babu has a strike rate close to 189 in this tournament at the moment. He has managed to score 64 runs with the best of 24*. He is also the best bowler in the team, has picked up nine wickets so far. He has an economy rate close to eight.

Mizanur Rahman is having a good tournament with the bat. He is the leading run-scorer for the team and is the most popular pick for the captain. He has scored 226 runs from his seven innings with the best of 74. He has a couple of fifties in this tournament so far.

Rahatul Ferdous is the most economical bowler available in this contest. He has given away just 5.75 runs per over and has managed to pick up seven wickets.

doesn’t need any introduction. The Bangladesh pacer has done well so far and has picked up eight wickets in the tournament with the best of 3 for 15.

Who Will Win Today Between MSC vs BU Dream11 Prediction, Match 53?

According to Kheltalk’s astrology MSC vs BU Dream11 match Prediction, Team MSC is likely to win this contest. It is going to be difficult considering the absence of Shakib Al Hasan. However, the team do have enough bench strength to replace the void and are likely to dominate in this contest.

According to Kheltalk’s MSC vs BU Dream11 toss prediction, MSC are likely to win the toss and opt for bowling here. Though most matches are won by the team batting first here, the team is likely to opt for bowling as rains are on cards.