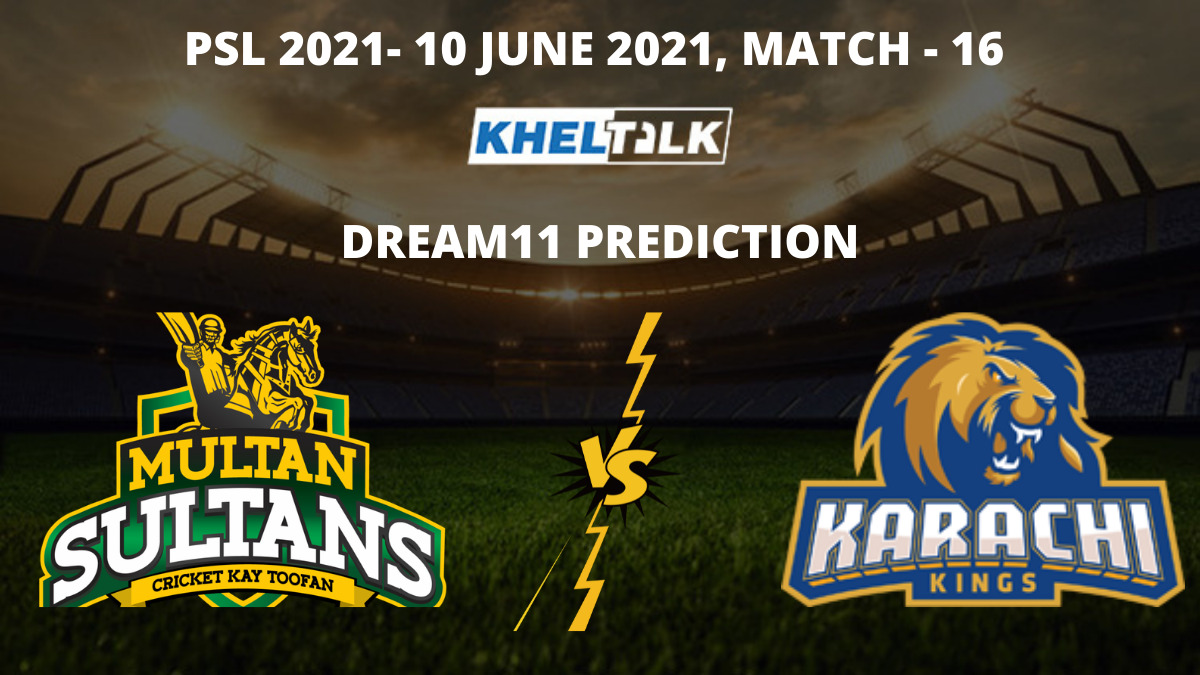 Welcome to MUL vs KAR Dream11 Prediction for Today’s Match Fantasy Cricket. Multan Sultans will take on Karachi Kings in Match 16 of the PSL 2021 on Thursday, June 10, 2021, at the Sheikh Zayed Stadium, Abu Dhabi. Keep reading to find out about the Match 16 MUL vs KAR Dream11 team today.

Multan Sultans will take on the 2nd placed Karachi Kings in the 16th match of the tournament. Despite the heroics of Mohammad Rizwan, Multan is currently at number five in the points table with just one win and four losses to their name. Their only win came against the current table-toppers Lahore.

On the other hand, Karachi Kings are one of the favorites to win the trophy, thanks to the presence of some of the big names like Babar Azam among others. The team is currently in the 2nd spot with three wins and two losses from their five outings. Their two losses came against Lahore and Islamabad.

When these two teams met earlier in the tournament, Karachi Kings ended up winning the match with ease by seven wickets. The Kings chased down 195 runs in 19th over itself.

It is yet another typical day in Abu Dhabi with the Sun taking over the day. According to the forecast, the temperature will be around 33 degrees Celcius for the most part of the day while it will go down to 30 degrees Celcius during the match-time. There is a 10 per cent chance of rain.

Both teams have some of the well-known players in the team. It is good to go with those players and make sure to fill the line-up with more all-rounders as well since they can fetch us points from both fronts.

Mohammad Rizwan has been outstanding throughout the tournament. While he is a must-have pick here, the team will be glad to have Shimron Hetmyer as an attacking option. Rahmanullah Gurbaz will open the innings alongside the skipper while Imran Tahir will be leading the spin attack.

Led by Babar Azam, the team has one of the strongest batting line-ups and the line-up only got better with the inclusion of players like Thisara Perera, Martin Guptill among others. Imad Wasim is likely to play a vital role in this contest.

The Pakistan Skipper Babar Azam is more of a mandatory pick in this contest. He so far has 258 runs from 5 innings with the strike rate close to 140. He has three fifties to his name while averaging 86 in the PSL 2021. He also has a couple of 40-plus scores in his last five T20Is.

Mohammad Rizwan is in form of his life at the moment. He is the leading run-scorer of the tournament at the moment. He so far has 297 runs from 5 innings while averaging close to 60. He has three fifties to his name and has a strike rate close to 141.

Imad Wasim’s all-round ability makes him one of the vital picks for the captain on the fantasy side. While he is yet to contribute with the bat here, he has been excellent with the ball, has picked up three wickets so far while giving away 7.76 runs per over.

Martin Guptill is likely to play this contest. The New Zealand opener is one of the new additions to PSL this year. Guptill recently played in the T20I series against Bangladesh where he had three cameos. Overall, he has scored 7757 runs in the T20s while striking at 131.43.

Since the pitch will assist the spinners more, Imran Tahir will have a huge role to play in this contest. The veteran spinner has 386 wickets to this name with an economy rate close to 7.

Though a bit expensive, Shahnawaz Dhani has managed to pick up wickets at regular intervals. He so far has nine wickets to his name with an economy rate close to 11.

With a strike rate close to 171, Sharjeel Khan is just too good to be ignored here. He so far has 200 runs from his five outings with the best of 105.

Bowlers: A Iqbal, B Muzarabani, I Tahir

Who Will Win Today Between MUL vs KAR Dream11 Prediction, Match 16?

According to Kheltalk’s astrology MUL vs KAR Dream11 match Prediction, Karachi Kings will begin this contest as the favorites. The team has a strong batting line-up and most of the players are in good form at the moment. On the other hand, Multan depends largely on Rizwan which might backfire for them.

According to Kheltalk’s MUL vs KAR Dream11 toss prediction, KAR is likely to win the toss and will opt for bowling here. Despite the conditions, winning the toss and opting for chasing has been a trend in PSL 2021 so far. In fact, Karachi won the reverse fixture while chasing the target.