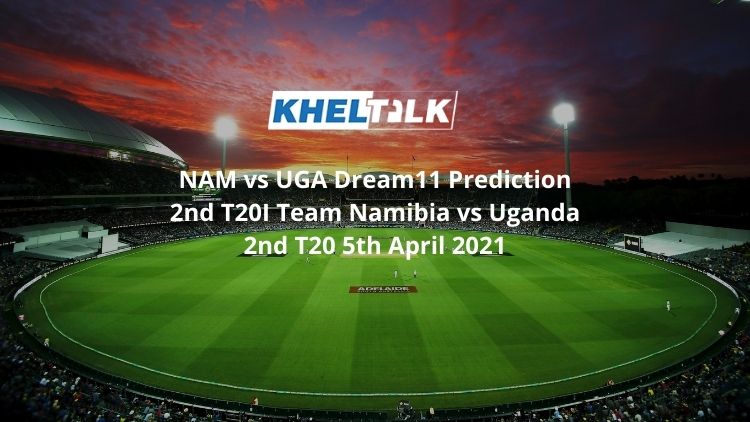 NAM vs UGA Dream11 Prediction 2nd T20I- Uganda is on a tour to Namibia for playing the three-match T20I series. The opener was played on April 3 and hosts easily outclassed visitors by a big margin of 7 wickets. It was an eye-opener for Uganda as this is not going to be an easy series for them going ahead.

Ronak Patel was one of the positive prospects for Uganda in the 1st T20I and he played a decent knock of 35 runs for his team. Rest other batsmen poorly failed to score and help their team in posting a respectable total on the scoreboard. Skipper Otwani, opener Mukasa, and Hamu Kayondo will have to come up with a proper batting display going ahead in the 2nd T20I if Uganda eyes on their first win against Namibia on current tour.

On the other hand, Namibia has all its bases covered in the T20I series. They have taken an easy lead over the visitors in the ongoing series by 1-0. Host skipper Gerhard Erasmus played a match-defining knock of 65 runs in the 1st T20I followed by a valuable contribution of Michau du Preez with the bat. In bowling Ben, Shikongo finished as the leading wicket-taker for his team. He registered brilliant bowling figures of 2-24 that set the tone of the game for Namibia. The fans should not expect many changes on the hosts’ side and they will look to come out with their winning combination itself.

According to NAM vs UGA Dream11 Prediction for Today’s Match Fantasy Cricket, Namibia will take on Uganda in the 2nd T20I on Monday, 3rd April, at the Windhoek, Namibia. Keep reading to find out about the NAM vs UGA Dream11 team today.

The track in the 1st T20I looked in favor of batsmen with bowlers getting very little assistance from the wicket. However, the batsmen got out due to their own silly mistakes and irresponsible strokes. None of the sides managed to take all 10 wickets in the previous game. Keeping the same thing in mind we feel that it is going to be a game around 145 to 155 runs and team chasing will have an edge.

This is the reason why a team winning the toss will look to field first at the match venue.

The weather will be perfect for a cricket match. But, bowlers will have a lot to do. The wind will be on a slower side and Dream11 users should keep this fact in mind while picking their fantasy side. They should know that a slow wind rate will reduce the chances of swing. Rest there is nothing much in weather to look out for with no chances of rain on the match day.

The weather and venue stats proves to be a batting track with spinners expected to play an important role in the second half of the game. Both sides have some star all-rounders that can turn things around single-handedly with their batting and bowling. So the Dream11 users are advised to give with more all-rounders instead of seamers in the 2nd t20i.

Gerhard Erasmus is in scintillating batting form in the ongoing T20I series. He smoked 63 runs at a strike rate of 172 in the 1st T20I. He was in the spotlight on Dream11 fantasy cricket as well. Namibia skipper earned 101 ratings in the Dream11 team. And, he should not be ignored while picking the best Dream1q1 fantasy team..

Loftie-Eaton is a utility all-rounder and Dream11 players should pick him from Namibia. In the previous game, he smashed 18 runs and bowled a few brilliant overs. If gets going in the next game then Namibia will easily register 2nd consecutive win over Uganda.

Ronak Patel finished as the highest scorer for Uganda in the series opener. He smashed 35 runs with his willow at a high strike rate. But, he failed in scoring a match-saving fifty for his side. The Uganda batsman will be determined to bring back his team on the winning track.

D Nakrani is the most important player for Uganda. In the 1st T20I, he showed his skills with the bat and ball for Uganda. Nakrani dismissed 1 batsman and scored runs as well. The Uganda all-rounder has earned 38 ratings in the Dream11 fantasy games and he will look to continue with the same momentum.

Karl Birkenstock is one of the fine batsmen from Namibia. Although, he failed to score well in the 1st T20I. But, he will certainly emerge as a surprise package for his team. Kheltalk backs him to emerge as one of the top performers in 2nd T20I

Otwani, the Uganda skipper managed only 7 runs in the 1st T20I. But, this will not raise questions on his ability to score runs on a good strike rate. We back him to come up with his best in the upcoming game.

Who Will Win Today Between NAM vs UGA  Dream11 Prediction, 2nd T20I Match?

According to Kheltalk’s astrology NAM vs UGA Dream11 match Prediction, Uganda will win the match. Although Namibia easily managed a win in the 1st T20I. But, Uganda has the ability to make a strong comeback. They will bounce back strongly in the upcoming affair as well. There is no doubt over the fact that Uganda has everything that can make them win the upcoming game.

According to Kheltalk’s RUB vs EME Dream11 toss prediction, NAM will win the toss and opt to field first here. In the 1st T20I, Uganda won the toss and Namibia will look to bounce back strongly.