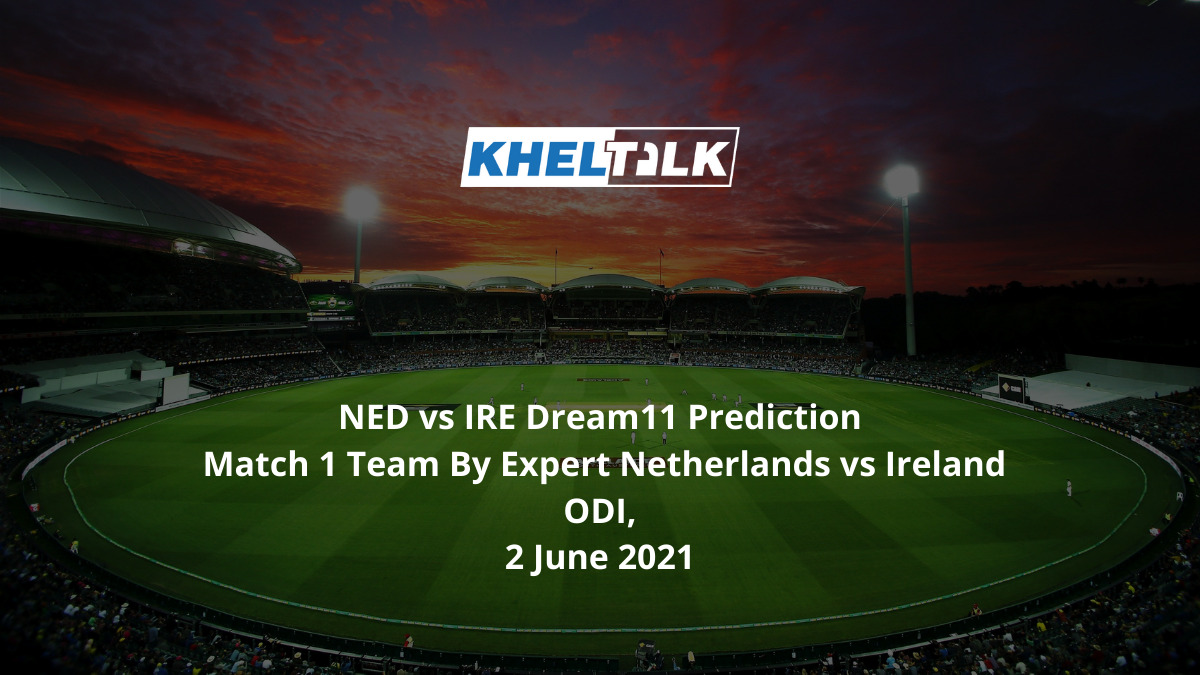 Ireland and Netherlands will lock horns in the longer format of the game for the first time in seven years. The Netherlands will enter this contest after a good practice against Scotland while Ireland didn’t play any ODIs in recent times.

For Scotland, Vivian Kingma is in good rhythm while Pieter Seelaar and Logan Van Beek are the players to watch out for.

However, the team is in good touch at the moment, thanks to their domestic tournament which concluded recently. Nevertheless, all eyes will be on the experienced candidates of Ireland- Paul Stirling, Kevin O’Brien, William Porterfield.

Also, Ireland leads their head to head with ease, has a 7-1 lead over Scotland in this format.

This will be the first ODI match at this venue but the ground has been used for domestic matches as well as T20Is. While the bowlers clearly had an upper hand in all these matches, it might vary in the longer format. In T20I, the average score on this ground is 92. So, one can expect a score of around 200 at this venue.

The weather will be partly cloudy on Wednesday at Utrecht. According to the forecast, the climate is expected to be around 16 degrees Celcius but there will be no rain or thunderstorms. The condition is likely to help the bowlers more.

This is a historic moment for the team as this will be the first time the cricket will be live on Dutch television and will have radio commentary in Dutch as well. Talking about the team, Pieter Seelaar will lead a mixed squad and most of the players who played against Scotland gained a place here as well. Shane Snater, Ryan ten Doeschate, Roelof van der Merwe, Colin Ackermann, Paul van Meekeren, Aryan Dutt are some of the big names to be left out.

Ireland once again will be going in with a young squad alongside a few experienced players like Paul Stirling, William Porterfield among others. They also have added Graeme McCarter to the squad. He last played for Ireland in this format more than 6 years ago. While he is an interesting addition to the squad, Balbirnie will be glad to have more options under his kit going into this contest.

Andrew Balbirnie has been one of the consistent performers for the team in recent times and he will be eager to lead the team from the front once again. He is in good form at the moment, had 85* and a ton in the recently concluded domestic tournament.

Paul Stirling needs no introduction and is more of a mandatory pick when it comes to the captain in the fantasy side. In the recent domestic tournament, Stirling had starts but couldn’t convert them to triple-figure. He has a couple of fifties in his last five matches.

A lot depends on Max O’Dowd in this contest for the Netherlands. Thankfully, he is in good touch with the bat this year and has a couple of 80-plus scores since the beginning of this year. He also has a ton to his name this year, it came against Malaysia recently.

Logan van Beek is more of a tricky pick here but his experience might come in handy for the Netherlands in this contest. One can expect him to pick up at least a couple of wickets here and he will be playing the finishing role for the team as well.

William Porterfield has found his form recently and is in good touch at the moment. He recently smashed a fifty while opening the innings for his domestic team.

Mark Adair’s all-round ability makes him one of the most popular picks in this contest. While he is capable of scoring big, one can at least expect 20 to 30 runs from him here.

Who Will Win Today Between NED vs IRE Dream11 Prediction, Match 1?

According to Kheltalk’s astrology NEDvs IRE Dream11 match Prediction, Ireland will win the match. The team has been doing well for a long time now and has an excellent record against the Netherlands. Most importantly, they have a strong batting line-up compared to the Netherlands.

According to Kheltalk’s NED vs IRE Dream11 toss prediction, Ireland are likely to bowl first. Since this is the first ODI match at this venue, the teams will love to chase here. Nevertheless, Ireland will begin this contest as favourites.