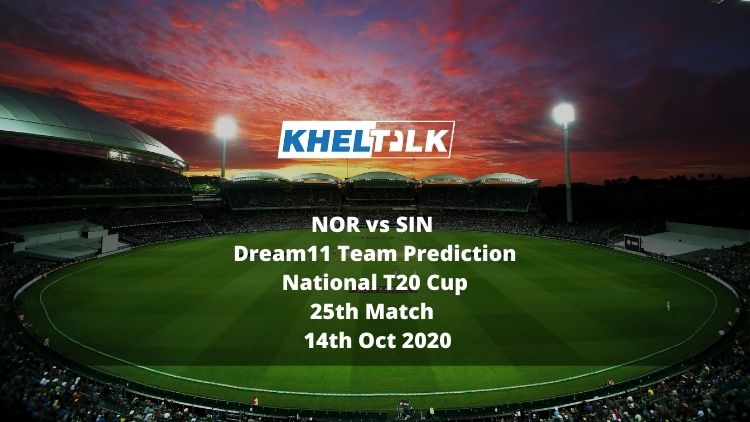 Table topper Northern Pakistan will now take on another feeble side Sindh in the next fixture of the National T20 Cup. The match is scheduled to be played at Pindi Ground, Rawalpindi.

Sticking at the peak of the points table, Northern have clearly stated their intentions and will keep up the winning momentum alive till they lift up the awaited trophy. On the other hand, Sindh has won just three games out of seven and they have unfortunately lost the opportunity to see themselves in semis.

Head to Head for NOR vs SIN:

The surface has been quite fortunate for the teams chasing down the target. The pitch mostly favors the batsmen. The average inning score here is around 160-165. The team winning toss must opt the ball first.

NOR vs SIN Dream11 Team News:

NOR vs SIN Dream11 Prediction, Line-Ups:

Captain Pick for NOR vs SIN Dream11 Team

Khurram Manzoor averages 31.20 and has also been the highest run-scorer for his team. Playing 7 games, he has notched 211 runs at a strike rate of 129.44.

Harif Rauf is the leading wicket-taker for Northern Pakistan. Bowling at an impressive economy of 7.29, Haris has bagged 17 wickets from 8 games and is expected to keep his momentum alive for the rest of the remaining tournament. He can be your captain as well.

Sohail Khan has been consistent with the ball for Sindh. Taking 16 wickets in 10 games is one convincing stat. Also, he didn’t give much run and has an economy of 7.82.

NOR vs SIN Dream11 Prediction: Who will win the match

Northern clearly is in superb form with both bat and the ball. They aren’t an easy nut to crack. Sindh would have to come up with multiple plans to derail Northern off the track which seems unlikely. So we bet Northerns to win this game easily.