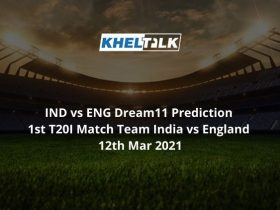 Here are the stats for the teams NSW vs TAS:-

The surface at Bellerive Oval, Hobart will completely support the batsmen. Pacers have got nothing on this track. Only line and length would work for them. Average inning score here is around 230.

A bright sunny day will be seen on the match day and no chances of rain.

Make sure you go with the 6:5 combination for this game and the spinners will surely earn your points here.

After losing their opening game to Queensland, Tasmania have now won few important games. So far, they have won two games out of three and sits at the second spot.

Here are a few predictions for the captain pick for the NSW vs TAS clash.

Tim Paine is a reliable wicket-keeper batsman and has been performing consistently with the bat for Tasmania. Opening the inning for the side, he has scored 108 runs in the tournament so far.

Steve Smith is another reliable asset for for New Soth Wales and steps up one down for the side. He hammered 127 runs against Victoria and announced his form. He is expected to showcase another brilliant inning yet again.

Australian pacer Patt Cummins has been lethal with the ball, so far he has chipped five wickets in two innings. You cannot afford to miss him.

Jordan Silk is known for providing balance in the middle order for Tasmania. So far, he has scored 146 runs in the tournament so far.

T Andrews has been quite economical for Tasmania and has even bagged six wickets in three games. One must not miss Andhews as he will surely throw his spell and will surely get you points.

Here is the Dream 11 Team prediction for NSW vs TAS. We are going with players who are currently in good form and can win the match with ease.

Head To Head Team For New South Wales vs Tasmania

Who Will Win Today Between NSW vs TAS Dream11 Prediction, Match 9?

According to Kheltalk’s astrology NSW vs TAS Dream11 match Prediction, NSW will win the match.

According to Kheltalk’s NSW vs TAS Dream11 toss prediction, NSW will win the toss and will opt to bat first.