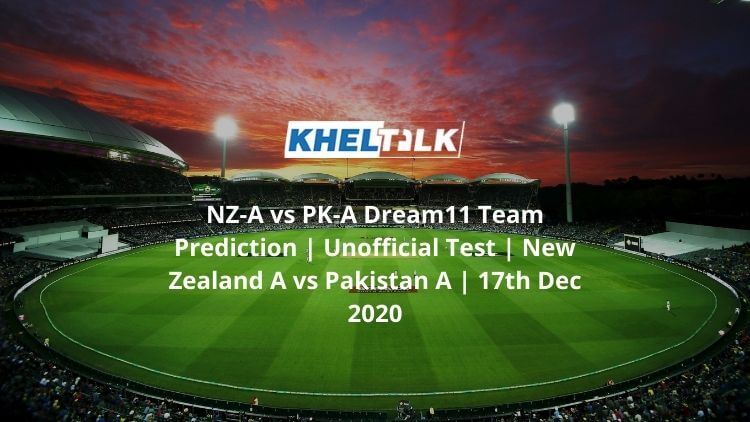 New Zealand A and Pakistan A will meet each other for an unofficial Test match which is scheduled to be played at Cobham Oval (New), Whangarei on December 17, 2020. New Zealand A players are coming after an impressive performance in the domestic circuit. Having no players national team for the warm-up match, the team still is stuffed with talented players such as Rachin Ravindra and Michael Bracewell will be seen leading the side. On the other hand, Pakistan players will give their best to get picked for the test series. Let’s go through our Dream11 Team Prediction for the 1st Test at Adelaide Oval between India and Australia.

The surface at Whangarei has shown balanced conditions, however, batsmen will get a bit of advantage while chasing. Pacers will have a decent swing with the new ball on the first day.

This is a fresh stadium, no matches have been played before here at this venue.

On THis left-hand batsman has got 4708 runs from 86 first-class matches at an average of 33.9 including 9 hundreds and 20 half-centuries. His highest score so far is 190 runs.

Azhar Ali has a promising record in the domestic circuit. Skipper has smashed 12,954 runs at an average of 40 in 206 first-class matches and taken 47 wickets too. Don’t miss him out.

Matt Henry is one serious player in the squad and experience here will surely help his side. In 23 inning, he has 30 wickets to his name in Test format at an economy of 3.27.

Yasir Shah has played 42 test matches for Pakistan and has a tremendous record. In 42 games, he has chipped 224 wickets at an economy of 3.22 with the best figure of 8/41. He can be impactful again.

NZ-A vs PK-A Dream11 Team Prediction: Who will win the match

It’s pretty clear here that Pakistan A has a better squad with few international players in the lineup. New Zealand will surely miss some important experience players at top of the order. Our Dream11 Team Prediction experts expect it will be a one-sided game and Pakistan A will easily notch a victory here.