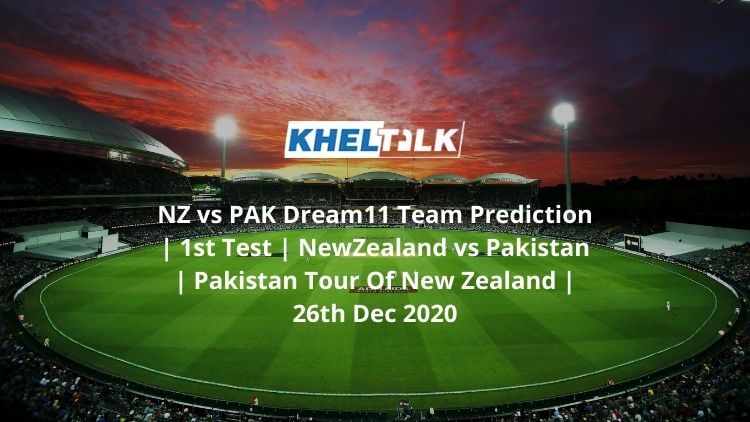 After the T20I series, Pakistan and the hosts New Zealand will lock horns in the longest format of the game. New Zealand will be heading into the tournament with confidence after winning the T20I series against Pakistan. Also, the team went on to win the Test series against West Indies just before the Pakistan series. To add more confidence to the team, New Zealand played the last Test against West Indies in the absence of Kane Williamson and still went on to win it.

Pakistan will enter this contest as underdogs and to make things worse, Pakistan will miss the services of Imam Ul Haq and the skipper Babar Azam. Mohammad Rizwan will be leading the team in their absence and it will be interesting to see how they go here. Let’s go through our NZ vs PAK Dream11 Team Prediction.

Bay Oval at Mount Maunganui is a bowling-friendly pitch but there the short boundaries will help the batsmen. This is just the 2nd Test at this venue and the venue has hosted 12 T20Is with 243 being the highest score, smashed by New Zealand against West Indies.

New Zealand looks all good on papers. They had a brilliant series against West Indies and are most likely to go ahead with the same team. Kane Williamson who is back after the birth of his first child will look to continue his form. In the last innings he played, he scored a brilliant 251. On the other hand, Kyle Jamieson will lead the pace attack for the team and he had 11 wickets in the West Indies series.

More worries for Pakistan as their main all-rounder Shadab Khan will not feature in the match and it is a big blow for the team considering that the team already will miss Imam Ul Haq and Babar Azam. However, a few of their batsmen are in good form after gathering runs in the practice match. One of the batsmen is Fawad Alam who will be playing a major role here.

Kane Williamson, undoubtedly, is the best choice when it comes to the captain in the fantasy team. He has 2 hundreds and a double hundred in his last six matches.

Tom Latham is yet another consistent performer for the New Zealand team in Tests. Latham has three fifties-plus scores in his last four innings with the highest score of 89.

Henry Nicholls looked in great touch in the last match against West Indies. He scored 174 runs with 21 fours and a six in the match.

Fawad Alam was the stand-out performer in the unofficial Test recently. He had 139 runs in the match and in his last four first-class matches, he has two hundred and a 90-plus score.

NZ vs PAK  Dream11 Team Prediction: Who will win the match

Both the teams are in good touch when it comes to Test cricket but New Zealand will begin the match as the favorites because they have played Test cricket very recently compared to Pakistan and they know the conditions well. Also, Pakistan will be missing out on a few important players in the team which gives the hosts an advantage as per our NZ vs PAK Dream11 Team Prediction