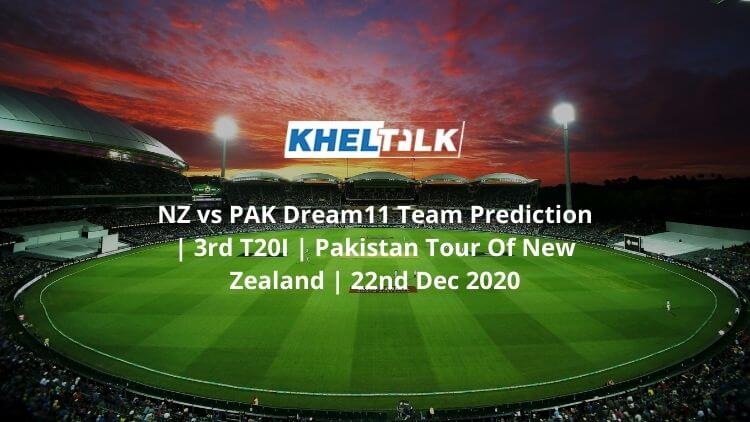 Pakistan will take on the hosts New Zealand for the 3rd and final T20I on 22nd December, Tuesday. Despite a good batting display, Pakistan couldn’t defend totals as New Zealand have won both the matches to take an unassailable lead of 2-0. In the 2nd T20I, New Zealand just got better with the team’s experienced players Tim Southee, Trent Boult, Kane Williamson coming back.

Pakistan skipper Babar Azam surely would’ve impacted the result but it is just unfortunate that he is yet to recover from his thumb injury. In his absence, Mohammad Hafeez is taking up the responsibility to score runs. In the last match, he had a brilliant 99*. A lot depends on him in this match as well. Let’s go through our NZ vs PAK Dream11 Team Prediction for the final T20i.

McLean Park is tailor-made for the batsmen and the conditions don’t really change in the 2nd half of the game. However, the teams usually prefer batting first at this venue.

Highest score at this venue- 230

Lowest score at this venue- 99

The hosts are looking for a clean sweep as they will take on Pakistan. The New Zealand team has shaped up nicely, especially, in recent times. Even if their big stars fail, the team has managed to win matches consistently.

In the last match, the team’s batting was led by Tim Seifert who scored a brilliant half-century. He had the support from the captain himself who switched gears from his 251 in Tests a few days ago. Tim Southee was the star performer with the ball and will try to replicate the same in the upcoming affair for NZ vs PAK Dream11 Prediction.

Things would have been different for Pakistan if their skipper was present. In the absence of Babar Azam, the team is currently suffering but will look to win his match here as they would love to go into the Test series on a positive note. For Pakistan, Shadab Khan and Mohammad Hafeez once again will hold the key. The team will be hoping that their star bowler Shaheen Afridi comes good here.

Kane Williamson will lead the race for the captaincy in the fantasy team. In his last three T20I innings, Williamson has scored three fifties and also has 251 runs in the Test match. He will be a perfect player to pick under this category of NZ vs PAK Dream11 Team Prediction.

Tim Seifert was the star in the previous game with 84* runs to his name. He also had 57 in the first T20I, importantly, he will open the innings for the team.

Mohammad Hafeez has the most runs against New Zealand in T20Is. In the last match, he smashed 99* to take his team past 160. There is no reason to ignore Mohammad Hafeez while picking NZ vs PAK Dream11 Fantasy side.

Tim Southee did well with the ball in his last outing and ended up with 4 for 21. He will be leading the bowling attack.

NZ vs PAK  Dream11 Team Prediction: Who will win the match

Going by the team’s form, New Zealand will begin this contest as the favorites. Pakistan is yet to identify the right combination as the players are relatively new. A lot depends on the toss here as the teams batting first will have the upper hand. However, as per our NZ vs PAK Dream11 Team Prediction, Pakistan will win the game and stop the Kiwi side from a historic clean sweep