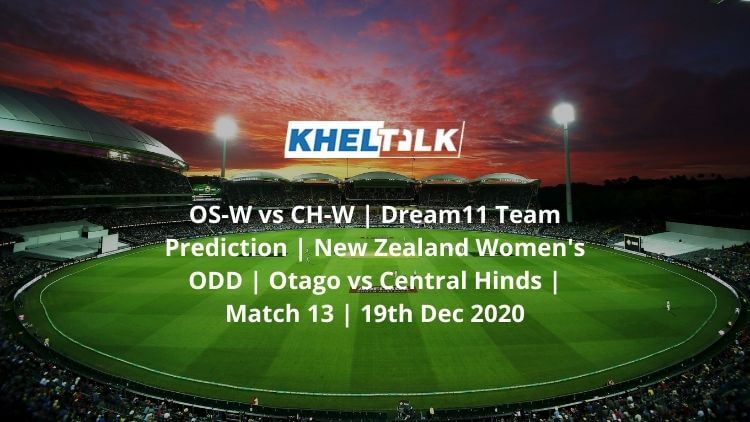 Otago women will take on Central Hinds in the 13th match of the tournament. Otago Women are still searching for their first win and have lost four matches in a row. They are at the bottom of the table. On the other hand, Central Hinds is one of the favorites to win the trophy. They have lost only one match from their four matches and are placed at number two in the tournament. Their only loss came against Wellington where the latter went on to win the match by just two wickets. Let’s go through our Dream11 Team Prediction.

This is the first match at the University Oval, Dunedin. The conditions usually are batting friendly here and the teams have reached 300 with ease, thanks to the shorter boundaries. One can expect a good chase here as the pitch is unlikely to change during the second innings.

Jess Watkin is undoubtedly the best choice for the captain. She will open the innings and has 8 wickets in the tournament so far. She also has scored useful runs with the bat. Watkins smashed 68* against Auckland recently.

Caitlin Blakely is the leading run-scorer for Otago. She has 133 runs with a best of 78. She averages close to 45 in the tournament so far.

Hannah Rowe has vast experience and she looked in good form in her last outing where she scored 62 runs on a difficult pitch. She also has picked up two wickets in the tournament.

Georgia Atkinson looked in good touch in her previous outing. She had 58 runs and also picked up 2 wickets. She has 5 wickets in the tournament so far with the best of 2 for 7.

OS-W vs CH-W  Dream11 Team Prediction: Who will win the match

Central Hinds will begin this contest as the favorites as Otago lacks the star power in their team. While the batting of Otago looks feeble, they still have a chance if their bowlers could pick early wickets. A lot will be dependent on Polly Inglis as w