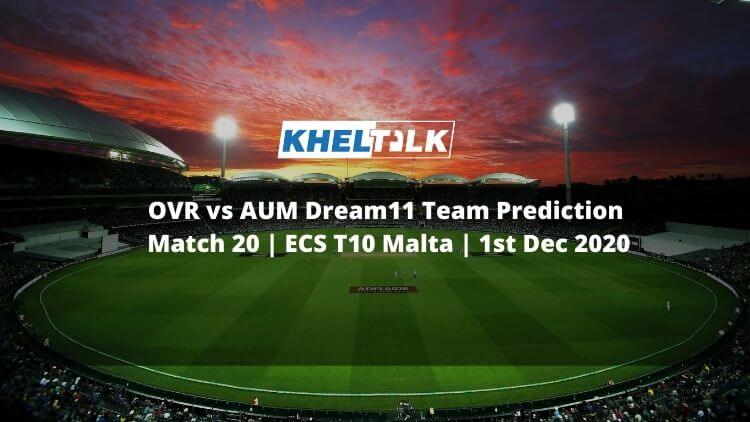 Overseas CC will lock horns with the American University Of Malta in the 20th match of the ECS Malta T10 League. Both Overseas CC and the American University Of Malta are yet to open their account in the tournament and are placed at the bottom of the table. AUM has lost three out of their four matches while one of them got abandoned due to rain. On the other hand, OVR has lost all their 6 outings so far.

Both Overseas CC and the American University Of Malta have struggled throughout the tournament. However, Overseas CC came closer in two of the matches where they have lost just by 12 runs. The American University Of Malta, on the other hand, almost defended 5 runs from the last over against Southern Crusaders CC. Let’s go through our Dream11 Prediction for the upcoming ECS T10 Malta game between OVR and AUM.

The teams batting first will have the upper hand as the conditions tend to get tougher while batting second. As of Sunday, the team batting first has won most of the matches.

Andy Naudi can grab us more fantasy points as he can contribute both with bat and ball. In his tournament, he has 5 wickets and also has scored 68 runs so far.

Zoheb Malek is the best choice among the available players in this fixture. He has 91 runs with the strike-rate close to 169 and also has picked up a wicket while giving away just 6.5 runs per over.

Abhishek Prajapati has vast experience but has played only one match in the tournament as of Sunday. In the match, he had 26 runs and also had picked up a wicket.

Heinrich Gericke has been the top performer for Overseas CC in this tournament so far. He has picked up 5 wickets and also has scored 82 runs.

OVR vs AUM Dream11 Team Prediction: Who will win the match

This is an important match for both the teams and so, we can expect them to fight hard for the win. Overseas CC, however, will begin this contest as the favorites.