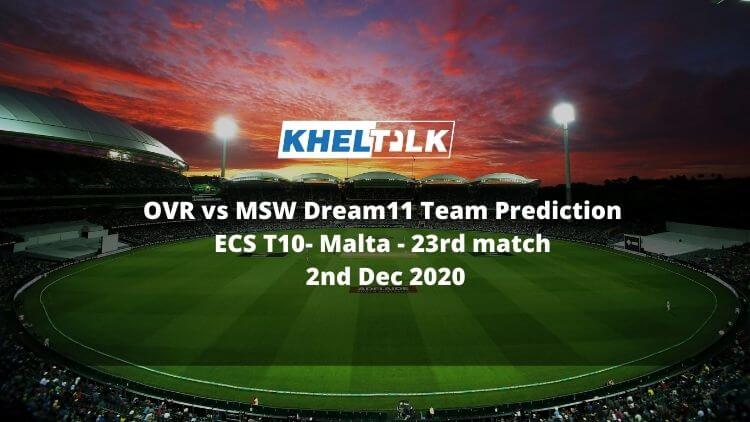 Overseas CC will lock horns with the Msida Warriors CC in the 23rd match of ECS Malta T10 League. Overseas CC are yet to open their account and have lost six matches in a row. They are at the bottom of the table.

On the other hand, Msida Warriors CC are enjoying a decent run here; are at 4th position with 3 wins, 2 losses from 6 matches. One of their matches got washed off due to rain. A win here will take them to the 2nd position ahead of Southern Crusaders CC, thanks to their net run-rate. While Overseas CC has struggled throughout the tournament, they have done comparatively well when it comes to defending the total. On the other hand, Msida Warriors have won all their three matches while batting first. Let’s go through our Dream11 Prediction for the upcoming game of ECS T10 Malta.

After a lot of matches, the condition of the pitch is improving and Monday’s results were the sample for the same. We had four matches on the day and we had both the chasing team and the team that batted first winning two apiece.

Rahul Nair is the top choice for the captain in the fantasy team. He has 168 runs with the strike-rate close to 172 and also has picked up 5 wickets while giving away just 7.32 runs per over.

Heinrich Gericke is one of the top players who has done well for Overseas CC. He has picked up 5 wickets and also has scored 82 runs.

Manuel Antony is the leading wicket-taker of the tournament at the moment. He has 7 wickets to his name with the best of 3 for 16. He has an economy rate of 7.90.

Jurg Hirschi has done well with the ball and is the leading wicket-taker for Overseas CC at the moment. He has 6 wickets with an economy rate of 7.63

OVR vs MSW Dream11 Team Prediction: Who will win the match

Going by the form, Msida Warriors will begin this contest as the favourites. Still, it’s a T10 game and the result can go either way.