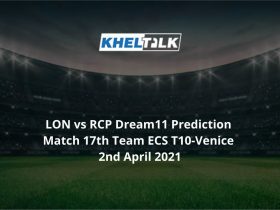 Punjab Kings will enter this contest with huge confidence after finally find a way to get out of the loophole to win a match after a long time. That victory would be sweeter because it came against the defending champions Mumbai Indians. Also, they were managed to win by nine wickets which is such a positive sign considering how poorly they fared in this tournament.

On the other hand, Kolkata Knight Riders will be kicking themselves for missing out on a couple of opportunities to win contests here. Since they couldn’t, they find themselves at the bottom of the table with a lot of thinking to do regarding, literally everything in the line-up. The team’s top order isn’t firing and their middle-order isn’t consistent, their bowlers are taken for runs. It is just too much to work on at the moment.

However, the team will enter this contest with a tiny bit of confidence as they have owned PBKS so far in this IPL. Kolkata have won 18 out of their 27 contests so far.

Narendra Modi Stadium is mostly a balanced one. The stadium used to bowler-friendly one but with time, it had lost its spice and is currently a pretty slow wicket. The batters will enjoy batting here and there will be something for the spinners. Since the venue is bigger than other grounds, one can expect teams to convert ones to twos with ease. The average first innings score at this venue is 171.

The pitch is going to offer an ample amount of turn and it will assist the batters as well. Players like KL Rahul, Dinesh Karthik, Shubman Gill would enjoy batting here and in the bowling department, a lot depends on spinners.

Kolkata does have a solid squad but at the moment, they are toiling hard to find the right line-up. Thus, we might see a couple of changes both in the batting order as well as the selection. The team might open with Rahul Tripathi and push Nitish Rana a spot below, also, Sunil Narine might take the front seat. They will have to find a way to sneak Lockie Ferguson into the line-up.

Despite Pooran’s poor outings, the team is likely to back him here once again. Punjab, in fact, will look to go in with the same line-up that proved well for them in the last match against Mumbai Indians. One can expect Deepak Hooda to bowl his full quota in this contest too. Also, a lot depends on Arshdeep Singh’s spell.

KL Rahul is the overwhelming favourite for the captaincy in the fantasy team. He began the tournament well but had a couple of glitches before finding his form at the right moment in the last match. Against Mumbai Indians, he played a sensible knock to take his team home while chasing a tiny total. He had a half-century there.

Chris Gayle, despite struggling, was able to hang around in the last match to take the team home along with KL Rahul. He was able to find boundaries with ease as usual and made sure to take singles and twos when it was required. Gayle so far has 119 runs to his name.

Nitish Rana, despite his poor outings in the last couple of matches, is the must-have pick from Kolkata Knight Riders. Once again, a lot depends on his form and the way he bats at the top to give his team a good start. He is their leading run-scorer with 186 runs to his name.

Shubman Gill has an excellent record against PBKS. In his last three matches, he has three half-centuries and averages close to 90. He has a strike rate close to 133. Gill has been struggling throughout the tournament to convert his starts and This could be his day.

With no doubts, Andre Russell and Pat Cummins are more of mandatory picks in this line-up. They both can contribute from both fronts and most importantly, the team depends a lot on them today.

Dinesh Karthik is yet another player with a good record against PBKS. In fact, a couple of matches ago, he smashed a half-century against the same team and helped his team to win the contest.

Ravi Bishnoi played his first match recently and fared decently. This pitch will assist him and one can expect him to grab a couple of wickets here.

Who Will Win Today Between PBKS vs KKR Dream11 Prediction, Match 21?

According to Kheltalk’s astrology PBKS vs KKR Dream11 match Prediction, this will be a close contest with KKR coming out on top. However, it is not going to be easy for Kolkata because of their current. The team needs someone to stand up today, and that could be Shubman Gill.

According to Kheltalk’s PBKS vs KKR Dream11 toss prediction, KKR will win the toss and opt to bowl first. Whoever wins the toss will look to bowl first at this venue. The team chasing has won most of the matches in this venue and it will be interesting to see how teams go here, considering this is the first IPL match at this new venue.