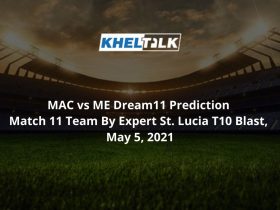 On papers, Sunrisers Hyderabad have everything a powerful batting line-up, excellent bowling and the right mixture of youngsters and experienced candidates. However, the team couldn’t get things done in all the three matches they had played recently.

In all three matches, the team had the match on their hands before going on to lose in the final overs. While their bowling has been top-notch as usual, they have a lot to complain when it comes to the batting and the middle-order.

On the other hand, Punjab Kings are also in the same boat with a couple of losses in a row after winning their first one against Rajasthan. The team, despite having one of the best bowling line-ups, have failed miserably with the ball and their batting order is yet another thing to blame here.

Among these two teams, SRH have been the dominant one. Both these teams has met 16 times and 11 of the matches are won by SRH.

Top Performers for PBKS vs SRH

Top Performers for PBKS and SRH in IPL 2021

Once again, the pitch at Chepauk Stadium will assist the spinners and the slow bowlers. In the last match, one could have seen the impact of the dew in the 2nd innings which had forced the team to change the ball. This sticky wicket will help the spinners more in the 2nd innings and as Rishabh Pant said during the post-match presentation yesterday, one who doesn’t lose many wickets early in the innings will win this match here and the pitch isn’t as bad as one would think. One can expect teams to opt for batting after winning the toss here as 5 out of the 7 matches here are won by the team batting first.

PBKS has a good batting line-up while SRH has a good bowling line-up. The players like KL Rahul, David Warner, Rashid Khan are mandatory while youngsters like Arshdeep Singh, Shahrukh Khan could prove to be the difference between both teams.

After a couple of poor performances, the team is likely to drop Riley Meredith in this contest and one can expect them to go ahead with a spinner. Fabian Allen is likely to play this game because of the spinning option. Jalaj Saxena, who played the last game, will play this game too.

Once again, the team’s batting order will be under the scanner. The team is likely to add Priyam Garg or Kedar Jadav in the middle to provide the necessary experience in the middle order. There is a high chance of seeing Suchith too.

David Warner will be the player to watch out for here. He found his form at the right moment for the team and has smashed 54 runs against RCB in the last match. In fact, he has the most runs against MI among SRH players, have scored 488 runs.

David Warner has been the team’s only good thing with the bat. The skipper has managed to produce starts in almost all the games but couldn’t really convert them to a big score. This could be his day. He so far has 93 runs from his three matches with a half-century to his name. He is the top scorer for SRH against PBKS and has scored 661 runs against the same opponent.

Rashid Khan, undoubtedly, is the man to watch out for here as the pitch will be the spinners’ ally here. A lot depends on his spell and if he can control the run flow here, SRH has a good chance of winning this. He so far has 16 wickets against PBKS and this year, he has picked up four wickets with an economy rate lesser than 6.

Mayank Agarwal will love to bat under this condition. He has better records on these tracks compared to those that support the pacers. He so far has 83 runs from his three matches with a strike rate close to 176 at the moment. Also, he is just 41 runs away to score his 1000 IPL runs for Punjab Kings.

KL Rahul is just one run away from his 5000 runs. He will become the fastest to achieve this feat. Undoubtedly, he is the man to watch out for here. He is their leading run-scorer with 157 runs from 3 matches with an average close to 53 and a strike rate close to 146. He has a couple of fifties in this tournament.

Jonny Bairstow will be opening the innings once again and his partnership with David Warner will be the deciding factor for the match. He so far has 110 runs from 3 innings and recently smashed a good cameo here.

Shahrukh Khan holds the key in the batting order here. The team might promote him to number four in this contest and playing at Chepauk Stadium, one can expect him to do well here. He so far has 68 runs with a strike rate close to 152.

Arshdeep Singh has been the team’s saviour with the ball. While almost all the bowlers were taken for runs, he has done well irrespective of the timing of the match. He so far has five wickets while giving away just 7.11 runs per over.

Manish Pandey, despite batting well, has found it difficult to get his team through in almost all the matches so far. He will be looking for some chance here and one can expect him to go for a good cameo. He so far has 101 runs from 3 outings.

Head To Head Team For Punjab Kings vs Sunrisers Hyderabad

Who Will Win Today Between PBKS vs SRH Dream11 Prediction, Match 14?

According to Kheltalk’s astrology PBKS vs SRH Dream11 match Prediction, SRH will win the match. This might be the day where SRH find their form for the first time and get something on board. The team has done well against PBKS, probably one of the best records. Thus, one can expect them to dominate here, however, a lot depends on their opening pair.

According to Kheltalk’s PBKS vs SRH Dream11 toss prediction, SRH will win the toss and opt to bat first. Since the teams batting first have won almost all the matches at this venue, one can expect the teams to go for batting first here.