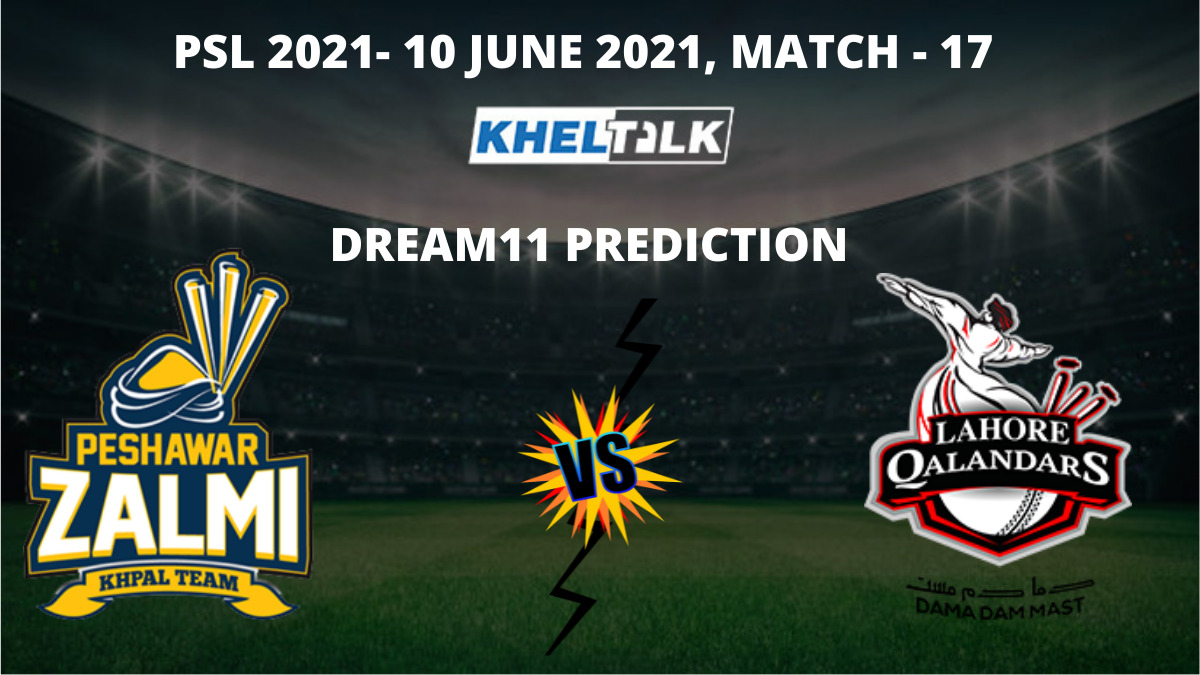 Welcome to PES vs LAH Dream11 Prediction for Today’s Match Fantasy Cricket. Peshawar Zulmi will take on Lahore Qalandars in Match 17 of the PSL 2021 on Friday, June 10, 2021, at the Sheikh Zayed Stadium, Abu Dhabi. Keep reading to find out about the Match 17 PES vs LAH Dream11 team today.

We all know that Sheikh Zayed Stadium, Abu Dhabi is quite a big ground with a quick outfield. However, the track is slow which usually confuses the batsmen. Pacers are likely to struggle at this venue and the surface offers a lot of assistance to the spinners when the ball turns sharply. A score of 160 runs or more would be a good total.

A clear sky is expected on 10th June. Well, having a slow track means that the ball won’t come easily on the bat. Batsmen must take their time to settle themselves and avoid playing risky shots.

Qalandars would be high on confidence after winning the very last ball thriller in their previous game. Fakhar Zaman who missed last time out is likely to join back and set up a good partnership with Akhtar. Muhammad Faizan, Mohammad Hafeez, and Ben Dunk are some reliable assets in the middle order. Rashid Khan has won games for the side and will again be asked to do wonders with the ball. James Faulkner and Shaheen Afridi were expensive with the ball in the last game and must bounce back strong. A Daniyal and H Rauf are other strong bowling attacks.

This will be a new beginning for Wahab Riaz’s side. They have a strong side and will be hoping to produce their best game here. Lots of expectations on the openers Kamran Akmal and Imam-ul-Haq. In the middle order, David Miller must add some valuable runs alongside Sherfane Rutherford and Shoaib Malik. Haider Ali and Riaz will be asked for late hitting with the bat. With the bowling attack, Riaz and Mohammad Imran must provide a breakthrough with the new ball. M Imran comes in with a lot of experience and his spell in the middle order can do some wonders alongside Saqib Mahmood and Mujeeb-ur-Rahman.

Mohammad Hafeez has been consistent with the bat. In five innings, he has smashed 210 runs with the highest score of unbeaten 73 runs. Currently, he holds an average of 70 and a strike rate of 164.6. Don’t miss him out, he is in great form.

Shaheen Shah Afridi looks lethal with the ball. He will surely not go wicketless in the upcoming games. In five innings, he has sent players to Pavillion ten times with the best figure of 3/14.

S Rutherford comes in with a lot of strength. In five innings, he has scored 129 runs with the highest score of 46. So far, he has hit six fours and ten sixes. He is capable of destroying any bowler’s economy. Don’t miss him out.

S Mohamood has chipped 12 wickets for Zulmi at an economy of 7.98 with the best figure of 3/12. Wahab Riaz has got himself in the lethal bowlers list as he has eight wickets to his name in just four innings.

Who Will Win Today Between PES vs LAH Dream11 Prediction, Match 17?

According to Kheltalk’s astrology PES vs LAH Dream11 match Prediction, PES is likely to start as favorites here. Peshawar Zulmi would be highly under pressure to perform in this game and now their middle-order must fire in the game. On the other hand, Lahore Qalandars are already high on confidence after the previous win and this would put them ahead of Zulmi.

According to Kheltalk’s PES vs LAH Dream11 toss prediction, PES is likely to win the toss here. The team winning the toss will opt to bowl first and looks forward to bundled the opposition for a small total.