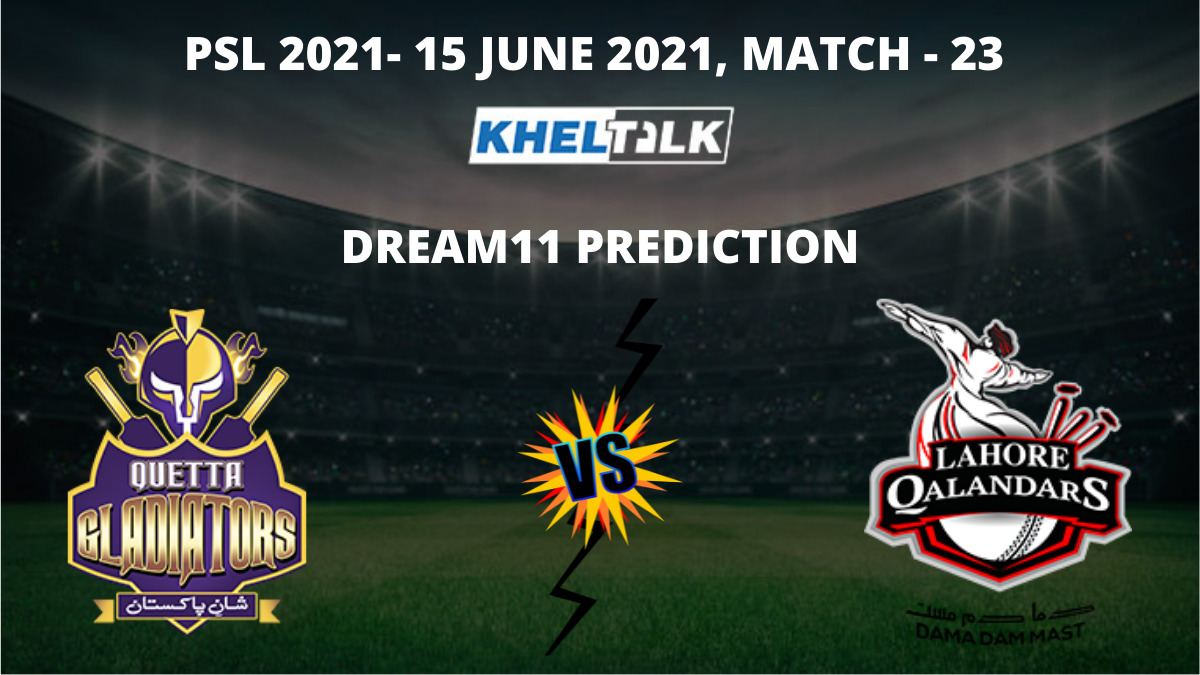 Welcome to QUE vs LAH Dream11 Prediction for Today’s Match Fantasy Cricket. Quetta Gladiators will take on Lahore Qalandars in Match 23 of the PSL 2021 on Tuesday, June 15, 2021, at the Sheikh Zayed Stadium, Abu Dhabi. Keep reading to find out about the Match 23 QUE vs LAH Dream11 team today.

Lahore Qalandars are having a good tournament so far and they are sitting pretty at number two in the points table with five wins from seven matches. A win here will take them to the top spot and is also a step closer to the next stage.

Quetta Gladiators, on the other hand, are at the bottom of the table and have won only one match so far. Their win came against Multan Sultans a few days ago. However, the team is not in a good place at the moment as they have lost both Faf du Plessis and Andre Russell to concussion. Both players are unlikely to play in this contest.

When these two teams met earlier in the tournament, Qalandars won the match by nine wickets as they chased down 179 runs with ease.

Going by what we have seen in this tournament so far, the pitch gets slower in the 2nd innings and most teams batting first here. The team batting first has won four matches out of seven so far. The highest score at this venue in PSL 2021 is 197.

The team will enter this contest as favourites and is likely to experiment with the squad. They do have some prominent names who are currently warming the bench. Since the team is on top, they might go in with a second string of players.

The team is likely to miss out on Andre Russell and Faf du Plessis as they had concussions while fielding. In their absence, Sarfaraz Ahmed will have more responsibility today. The team had picked Saim Ayub in the last match and he is likely to play today as well.

Fakhar Zaman is the most popular choice for the captain in the fantasy side. After a string of poor knocks, he had managed to find his form in his last contest. Zaman made 44 from 37 deliveries in his last match against Islamabad United.

Mohammad Hafeez hasn’t been consistent with the bat so far but is likely to bounce back soon and this could be his day. He so far has made 220 runs from his seven outings with the highest score of 73* and with an average close to 44 in this tournament.

James Faulkner has been a revelation with the ball in this tournament so far. He so far has picked up eight wickets from his three matches and he averages lesser than 10 with the ball. With an economy rate of 6.16, he is a must-have pick here.

Since Mohammad Nawaz can contribute from both fronts, he is an essential pick here. He has picked up three wickets so far in the tournament while giving away just 7.73 runs per over and has added a couple of cameos to his name.

Rashid Khan, as expected, is excellent in the tournament so far. He has picked up seven wickets while giving away just 5.45 runs per over. He is also useful with the bat.

Usman Khan has added important runs to the total. He has played only three matches so far but has 123 runs with the best of 81 while striking at 133.69.

Tim David averages 90 in the tournament at the moment. He has played three matches and has the highest score of 64* while striking at 152.54.

Azam Khan has the ability to win matches single-handedly but is yet to perform big in the tournament. He so far has 124 runs from seven innings.

Who Will Win Today Between QUE vs LAH Dream11 Prediction, Match 23?

According to Kheltalk’s astrology QUE vs LAH Dream11 match Prediction, Lahore are the clear favourites to win this contest. They will look to bounce back after the loss against Islamabad. On the other hand, Qalandars need something special here considering they will be missing out on Faf du Plessis and Andre Russell.

According to Kheltalk’s QUE vs LAH Dream11 toss prediction, LAH is likely to win the toss here. The team is likely to bowl first in this contest. In the last match, they did well while bowling first by reducing Islamabad to 20 for 5.