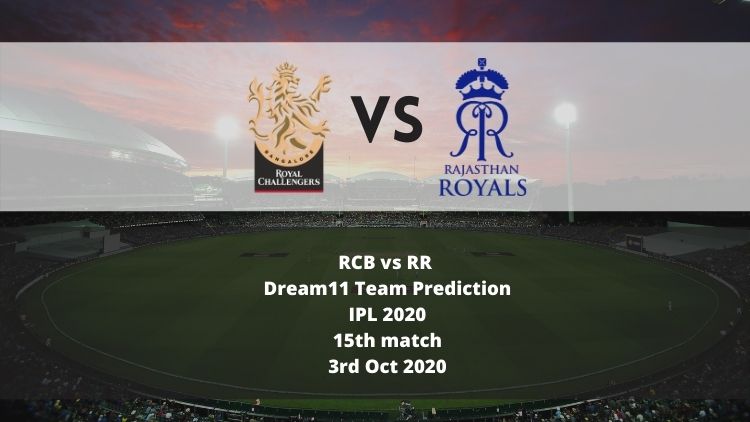 In the first doubleheader game on Saturday, 03rd October, Royal Challengers Bangalore take on Rajasthan Royals. Both the teams have played three matches each and have won two and lost one. RCB won their last match against Mumbai Indians in the super over while Royals received a mammoth defeat at the hands of KKR in their last game.

The pitch at Abu Dhabi has remained slower even in T20s but that might change in this tournament. The dew will play a part so win the toss and bat first will be the mantra. As it has happened so many times in this season, the death overs could decide the fate of the game.

The South-African legend is in terrific form and has scored two fifties in three games in this IPL. In the last match, he scored 55 not out against Mumbai Indians.

Archer has been the most lethal bowler in this tournament so far although his numbers don’t show that. He has three wickets in IPL so far and has scored 46 runs in quick time.

The man everybody is talking about in this IPL, Sanju Samson is in great form and six-hitting ability is noteworthy. He has two big half-centuries in three games is RR’s leading run-scorer this season.

The Engish batsman showcased a glimpse of his ability during his quickfire 21-run in the last innings against KKR. He looks in good touch and bats in the Powerplays. So against a feeble bowling attack like RCB, expect him to score runs.

RCB vs RR Dream11 Prediction: Who will win the match

Rajasthan Royals are struggling with depth in their batting order. There is little batting beyond Smith, Buttler, and Samson. On the other hand, RCB’s biggest concern is their death bowling. And they are nowhere close to fixing that. RR has a better bowling unit and the outcome of the game will be decided on how RCB batsmen tackle the threat of RR’s bowler. Considering all these aspects, it seems RR will overpower RCB based on their better bowling unit.