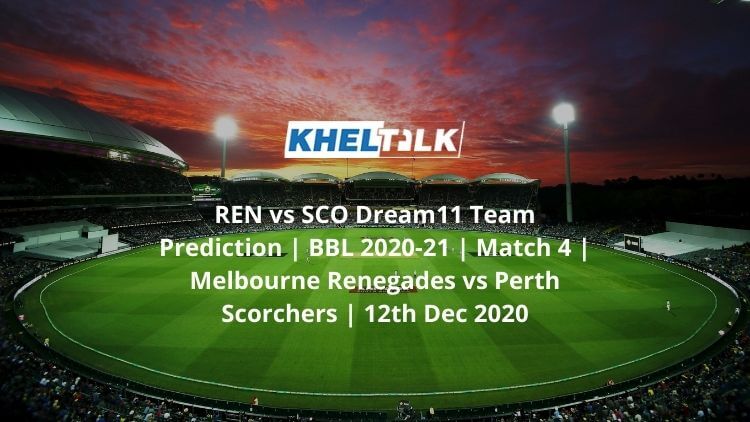 Melbourne Renegades will take on Perth Scorchers in the 4th match of the tournament at the Bellerive Oval on Saturday. Renegades, who was the champion of the 2018-19 edition had a poor season in 2019-20 where they ended up at the bottom of the table. With the arrival of Rilee Rossouw, the team is looking good on papers.

Perth Scorchers had an ordinary season last year where they had finished at 6th position. This year, the team will go in with a few new faces including Colin Munro and Joe Clarke. To add more boost to the team, Mitchell Marsh is declared fit as well. Let’s go through our latest Dream11 Team Prediction for the upcoming game of BBL 2020-21 between Melbourne Renegades and Perth Scorchers.

The pitch will offer support to both batsmen and bowlers. The pacers will have the upper hand during the first few overs and there will be something for the spinners as well. The shorter boundaries will come in handy for the batsmen as the edges are likely to fly over the ropes. The toss will play a crucial role as the condition is unlikely to change through the innings.

Highest team score at this venue- 213

Aaron Finch was one of the stars in the ODI series against India. He had two fifty-plus scores and also had a hundred in three matches he had played.

Shaun Marsh has 6124 runs in T20s with an average close to 39. He is in good touch and had scored back to back tons in the Sheffield Shield tournament recently.

Mohammad Nabi can contribute both with bat and ball and is one of the top picks here in the absence of many key players. He has 4118 runs with a strike-rate close to 142 and has 267 wickets as well.

Josh Inglis scored a ton in his recent match in the Sheffield Shield tournament. In T20s, He averages 26.4 and has 528 runs while striking at 146.26.

REN vs SCO Team11 Team Prediction: Who will win the match

Since this is the first match for both teams, it is difficult to predict the winner in this contest. However, Melbourne Renegades will begin the contest as the favorites because of the presence of international players who are in good form currently according to our Dream11 Team Prediction experts.