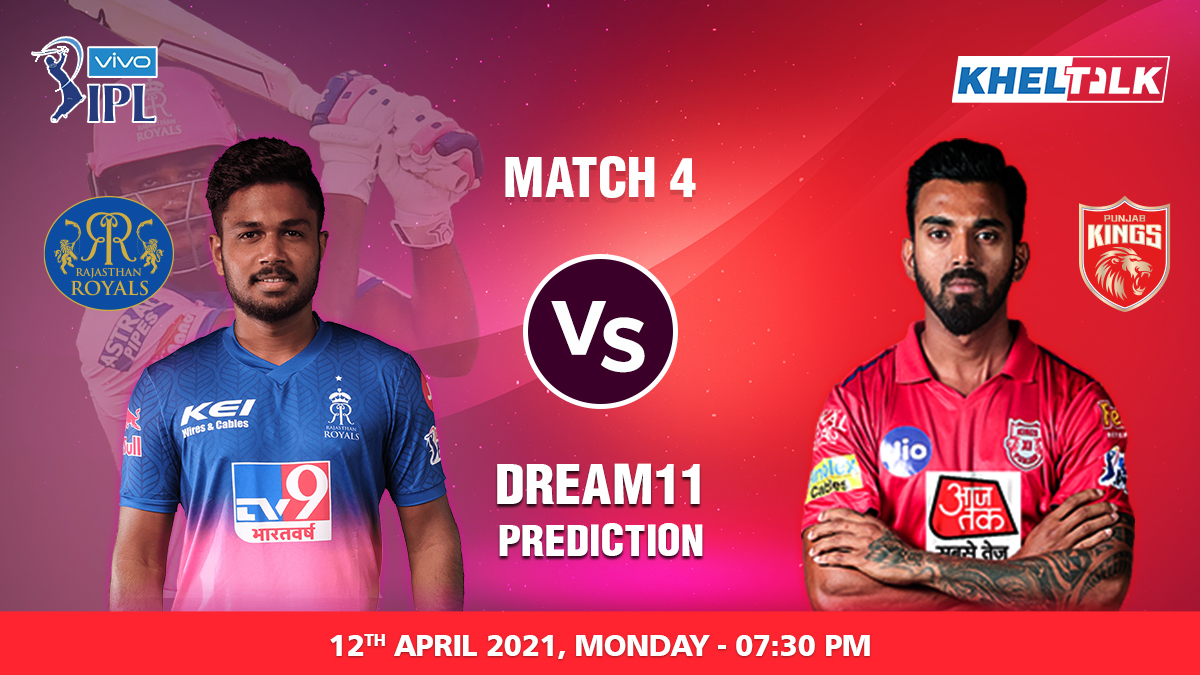 Rajasthan Royals and Punjab Kings will come face to face in the 4th IPL match on April 12. The two teams look pretty strong as far as their line-up are concerned. Also, both the franchises will be looking to come up with bang on performance in their campaign opener in order to get off the mark with a win.

On one side, KL Rahul will be leading Punjab Kings. They have a jam-packed batting line-up fully equipped with some astonishing players like Chris Gayle, Mayank Agarwal, Nicholas Pooran and others. On the other hand, RR have the likes of Jos Buttler, Chris Morris, Rahul Tewatia and Ben Stokes. There is no doubt over the fact that the two teams will be expecting to put their best forward for the fans.

Wankhede Stadium is like a deathbed for the bowlers. Boundaries small make it very difficult for the bowlers to grab wickets. Moreover, there is nothing much for the spinners to churn out from the track. There is no big total safe as everything looks pretty achievable. In the previous game, DC chased down a mammoth target of 188 runs without much hassle against CSK. RR and PBKS will be pretty aware of the Wankhede’s track and they will look to field first after winning the toss.

According to the forecast, the weather is expected to deviate between 30-33 degrees Celcius during the match and there is no chance of rain during the match time. Also, the average wind speed will not be on a higher side and seamers should not expect much help from the weather.

Punjab Kings’ Jhye Richardson will be the player to watch out for at this venue alongside Mustafizur Rahman if they were given an opportunity. In the absence of Jofra Archer, Rahman would fit the void. However, the team is likely to opt for an extra batter here.

Ben Stokes, Jos Buttler, Chris Morris and Mustafizur Rahman are likely to the four overseas players for the night. Rajasthan Royals suffered big blow as their star player Jofra Archer is still recovering from his injury and he will not be available for the upcoming games.

KL Rahul and Mayank Agarwal will open the innings for Punjab Kings. This season they have a more decent bowling line-up in the presence of Jhye Richardson and Mohammed Shami leading from the front. The spin duo Murugan Ashwin and Ravi Bishnoi will once again have the responsibility on their shoulder.

KL Rahul is a dominating batsman and he did the same in the previous edition with the bat against every opponent. He won the orange purple cap and finished as the leading run-scorer. This season he will look to get off the mark brilliantly and win his second purple cap in a row.

Sanju Samson has a brilliant record against Punjab Kings. This season he will be leading Rajasthan Royals and fans can expect to come out more mature as a batsman for his team, unlike the previous edition that was played in Dubai.

Mayank Agarwal will be opening the innings once again and he is more of a tricky pick for the captain here but can come good on his day. Last year, he smashed 106 from just 50 deliveries against the same opponent. He has the ability to replicate the same here as well. In the last season, he ended up with 424 runs.

Ben Stokes will be one of the players, who will be in demand as far as Dream11 Prediction is concerned. He can well contribute with the bat and ball. Stokes is reckoned as one of the best all-rounders in world cricket. And, he will look to justify his tag with a glittery performance.

Chris Morris will be under pressure to perform here, especially, after going for a lot in the auction. So, we are going to see more of him in this tournament, and is likely to bat at the top as well.

Jhye Richardson finished high on the charts in BBL 2020-21. He was the leading wicket-taker in the last edition of the Big Bash League. He is expected to play crucial role for Punjab Kings as far as their fast-bowling is concerned. If he gets going well, then RR will surely find difficulty in defeating PBKS.

Here is the Dream 11 Team prediction for RR vs PBKS. We are going with players who are currently in good form and can win the match with ease.

Head To Head Team For Rajasthan Royals vs Punjab Kings

Who Will Win Today Between RR vs PBKS Dream11 Prediction, Match 4?

According to Kheltalk’s astrology RR vs PBKS Dream11 match Prediction, PBKS will win the match. Although the track is not suitable for the bowlers. But, that team will only win the game, whose bowler will be better on the matchday.

According to Kheltalk’s RR vs PBKS Dream11 toss prediction, PBKS is expected to win the toss and it is well known that the side winning the toss will look to field first. There is no second doubt to that if Punjab won the toss they will go for the fielding.