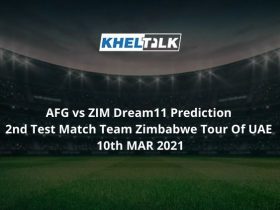 Rajasthan Royals will be expecting to get on to the winning track after suffering defeat in their previous encounter against Mumbai Indians. The former IPL champions are not having the best of their season and their team has not come up with good team effort with consistency.

In the previous game, Jos Buttler, Sanju Samson showed a glimpse of their good form with the bat. However, they failed in converting good starts into big ones. But, RR will be expecting to fire from the word go against SRH. The biggest problem for RR is their bowling unit that has not done a good job till now. Young pacer Chetan Sakariya and Chris Morris have taken wickets. But, they lack in consistency and Jaydev Unadkat is having a usual poor season with the ball. There are several voids in RR and skipper Sanju Samson will have to fill the voids before taking the field as the tournament is now entering into a competitive mode.

SRH has announced Kane Williamson as their skipper for the rest of the season. And, the orange army has given hint on changing overseas player combination. This might force David Warner out of the playing 11 and Jason Holder might be picked in the upcoming affair against RR. Rashid Khan will once again have the responsibility to lead the bowling attack. SRH have the services of Manish Pandey, Jonny Bairstow, Vijay Shankar, and Kane Williamson, who will be expected to fire good knocks in order to bring their side on the winning track

The track has so far gone in the favor of the chasing side in the ongoing IPL 2021. So far, this venue has hosted 3 games and teams chasing have ended up winning on all the occassions. There is not enough assiatance for the swing bowlers. But, medium-pacers can create problems for the bowlers with their variations. The spinners will also come into the picture and leg-spinners are expected to make a big difference in the match.

Yashawasi Jaiswal has played knocks well in the thirties at a good strike rate. The youngster has shown a glimpse of his confidence to perform well on such a big stage. The Dream11 users can expect him to blast against Sunrisers Hyderabad.

RR is expected to go out with the opening combination of Jos Buttler and Yashaswi Jaiswal with Sanju Samson, Shivam Dube at number three and 4. David Miller will be asked to play the role of a match finisher once again.

SRH might opt for few important changes on the side. Jason Holder or Mohammad Nabi can come in place of David Warner, who played a run-a-ball knock in the previous game against Chennai Super Kings

Jos Buttler has finally got into his grooves and the Delhi track will suit his batting style as well. He should not be ignored while picking the Dream11 fantasy team. In the previous game, he played a decent knock of 41 runs and fans can expect him to click an even bigger knock against Sunrisers Hyderabad. So far he has managed 116 runs in 6 games for RR.

Manish Pandey has the consistency to score runs with the bat. Although, his strike rate stays on the lower side. But, he scores well with the bat when it comes to IPL and he proved his worth with the bat in the previous game. He made a comeback in SRH’s playing 11 and smashed 61 runs off 46 balls. This is the reason he can be picked as the skipper of a fantasy side.

Sanju Samson, one of a kind batsman for RR. If it is his day then RR will be the happiest team on the planet. He has an issue with his consistency to score runs in every game for Royals. However, he is still the leading run-scorer for his team with 229 runs and can be a big player to watch out in the upcoming affair.

Kane Williamson is one of the most dependable batsmen for SRH. He has proved his worth in every role given to him in IPL 2021. This is the reason why management picked him as the skipper for the rest of the season replacing Warner. He was on fire in the previous match where Warner struggled to score runs.

Jonny Bairstow, one of the positive prospects for SRH in IPL 2021. But, he is yet to convert a big knock with his willow. SRH fans and Dream11 users should keep a close eye on Bairtow while picking the Dream11 Fantasy cricket team. He will be eager to take the field in order to bring his side on the winning track.

Rashid Khan showed against Chennai Super Kings that he can turn the tide in favor of his team. He took back-to-back wickets in the last over of his spell.  Being a leg-spinner, the track will favor his bowling, and will be tough for the opposition batsmen to score runs against him.

Chris Morris is currently the leading wicket-taker between both teams. His variation’s in the bowling have gone in his favor. Also, he has the caliber to play cameos for Royals. So, he can also make it into any and every Dream11 team

Head To Head Team For RR vs SRH

Who Will Win Today Between RR vs SRH Dream11 Prediction, Match 28?

According to Kheltalk’s astrology RR vs SRH Dream11 match Prediction, Sunrisers Hyderabad will win the game. They have appointed Kane Williamson as their new skipper and we expect him to give his best on the field. Also, players like Rashid Khan, Manish Pandey, and Jonny Bairstow give them an edge over RR.

According to Kheltalk’s MI vs CSK Dream11 toss prediction. SRH is expected to win the toss and they will look to field first as the chasing on the Arun Jately Stadium is easy and all the teams have won the game in IPL 2021 while chasing at this venue.