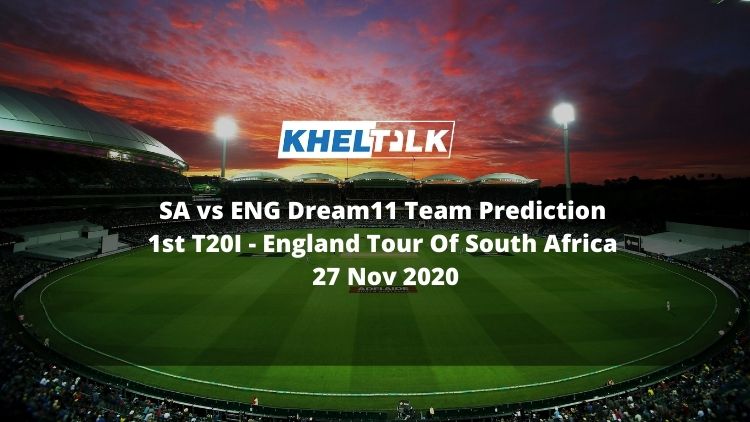 T20I cricket resumes and it is the ODI world champions England take on South Africa. The first match of the T20I series will be played on 27th November at Cape Town. Both teams will be eager to make a mark in this tournament and hence this will be an interesting contest. So let’s look at the SA vs ENG Dream11 Team Prediction, Top Captain & Vice-Captain Picks, Head to Head, Grand League, and Fantasy Tips.

This is the first game of the T20I series so it will be a fresh wicket and hence the batsmen will fancy their chances. Expect a perfect T20 track with plenty of runs on the board.

166 (In previous encounters at this venue)

de Kock was in stellar form in the IPL and he will be eager to continue his good form. He bats at the top of the order and plays the big shots fearlessly. So expect him to make then most of the powerplay overs. He has scored more than 6000 runs in 200 T20 games and has an average of 33.59 and a strike-rate of 138.67.

Ben Stokes is having a dream run since the last year. He won his team the World Cup and played a legendary knock in the Ashes and then scored a hundred in the IPL. The all-rounder now will be eager to repeat the heroics in the T20I series. He has scored 2615 runs in 131 T20 games and has also picked 70 wickets. He is in prime form and has the habit of rising to the occasion.

Jason Roy is one of the most dangerous opening batsmen in the world at the moment. His all-out aggressive batting approach allows him to pile up runs in the powerplay overs. He loves pace on the ball so he will fancy his chances against South Africa’s pace attack. He has more than 5000 runs in 210 T20 games at a strike-rate of 144.12 and he averages 27.78.

A Nortje set the IPL on fire with his brutal pace. He bowled over after over at a terrific pace and claimed wickets in heaps. And now he will be eager to breathe more fire donning the jersey of his national team. He has 49 wickets in 38 games at a strike-rate of 16.9. But what makes him dangerous is his recent form where he is clicking 150 kph regularly.

SA vs ENG Dream11 Prediction: Who will win the match

England is the world champion for a reason. They have gun players and play an aggressive brand of cricket which makes the favorites in any match they play. So in this match too expect them to win this game.