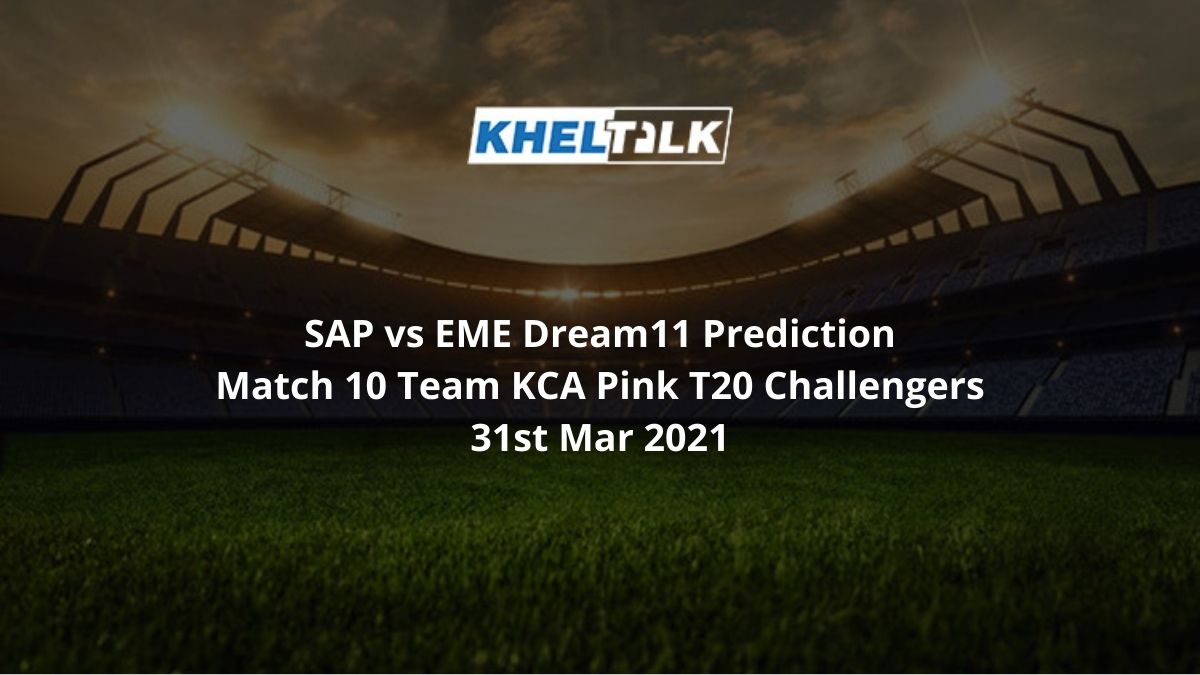 Table Topper SaPphire will now lock horns against the most failed side of the tournament – Team Emerald. With three wins from three-game, Sapphire leads the points table by 12 points, meanwhile, Emerald has 0 points to their name and is at the bottom of the points table.

Team Sapphire will be looking forward to grabbing their fourth win in a row, while Emerald will be hoping to open their account in the tournament.

Here are the stats for the teams SAP vs EME:

Seeing the previous game, the pitch at SD Ground has got nothing to offer to the batsmen. Pacers will enjoy swing in the initial overs and with the game going ahead, the surface will get more slower. Score somewhere around 120-130 can be easily defended.

It has a tropical climate. The temperate here averages 26.6 degrees. Precipitation here is about 2546 mm per year. No chance to rain is expected on match day.

Pacers and spinner are more impactful at this venue. It will not be easy for the batsmen to connect the ball. Make sure, you with the combination of 7:4.

Having an emphatic start in the tournament, Team Sapphire is surely not in the mood to lose their position on the points table. Sapphire might not make any changes for the upcoming games.

No combination has worked for Team Emerald so far. Lossing all three games, Emerald desperately needs to win to boost up their confidence. It seems unlike now as they would be facing the most successful team of the tournament.

Bhoomika Umbarje of Team Sapphire has been showing no mercy to the bowlers. In three innings, she has smashed 108 runs at an average of 54.00 including 16 fours and 1 six. Coming top the order, Bhoomika gives a good start to the side which takes off all the pressure from the middle order. Don’t miss her out.

Divya Ganesh has scored maximum runs for her side, Emerald. Scoring 62 runs in three innings make her the most reliable and valuable player on the side. So far, she has smashed six fours and two sixes in the tournament.

Sanjeevan Sajana and Sandra Suren have been lethal with the ball for Sapphire. Chipping 8 and 6 wickets respectively, these two can turn things around at any moment. Not only they have been chipping wickets at regular intervals, but have kept their economy under 4. These two can be the game-changer player of the match again.

Who Will Win Today Between SAP vs EME Dream11 Prediction, 10th Match?

According to Kheltalk’s astrology SAP vs EME Dream11 match Prediction, the SAP will win the match. Sapphire will be against the most failed side of the tournament. Having a better batting lineup and wicket-taking bowlers, they will easily notch the upcoming game.

According to Kheltalk’s SAP vs EME Dream11 toss prediction, SAP will win the toss and opt to bat first here. If Team Sapphire bats first and score somwhere around 100, then they would easuly defead their target with thier great bowling line up.