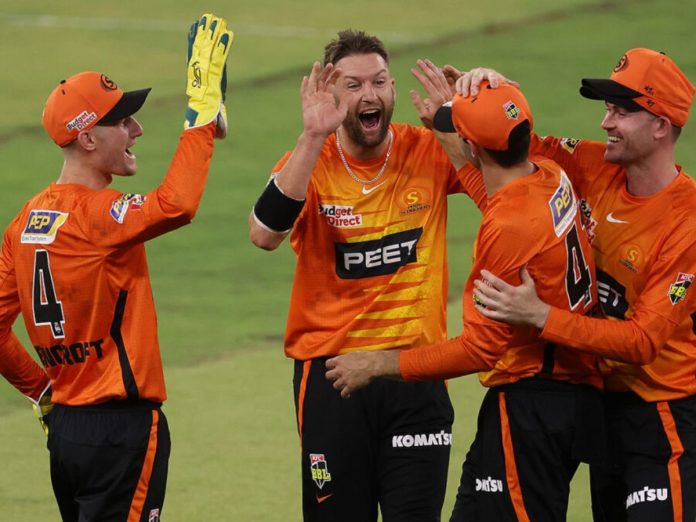 Perth Scorchers find themselves in the 2nd spot of the table after Sydney Sixers’ win in the last game. The team has 8 wins and three losses in their 11 games. A win here will take them back to the top of the table.

Hobart Hurricanes are looking for a way to get back to the top four. They are in the 5th spot with five wins and as many losses but they have played only ten matches.

The weather in Perth will be a bit warmer with a hint of clouds. The precipitation level is likely to be 10%, with humidity to be around 62%.

Josh Inglis is one of the top performers for Perth Scorchers in the tournament. The keeper has scored 311 runs in his last ten games here with a strike rate close to 159.

Tim David is at his explosive best for the past two years. He has 262 runs in his last ten games with a strike rate close to 163.

Paddy Dooley is one of the leading wicket-takers in the tournament. He has managed to pick up 15 wickets in his eight games.

Caleb Jewell averages close to 35 in his last seven matches. He has a strike rate close to 163 and is expected to dominate here.

ALL: F Ashraf, A Hardie

ALL: F Ashraf, A Hardie, A Agar

Who Will Win Today’s match Between SCO vs HUR?

Perth Scorchers will begin this game as favourites. They are in a good position compared to Hobart Hurricanes and they have a good chance of finishing in the top two. The Scorchers will look for a win here as it will take them to the top of the table. Nathan Ellis needs to fire big for the Hurricanes to stay in the hunt.

Who Will Win Today’s Toss Between SCO vs HUR?

According to Kheltalk’s Toss Predictor, Hobart Hurricanes are expected to win the toss and bowl first. Since the pitch will assist the batsmen more, chasing will be a better option here.