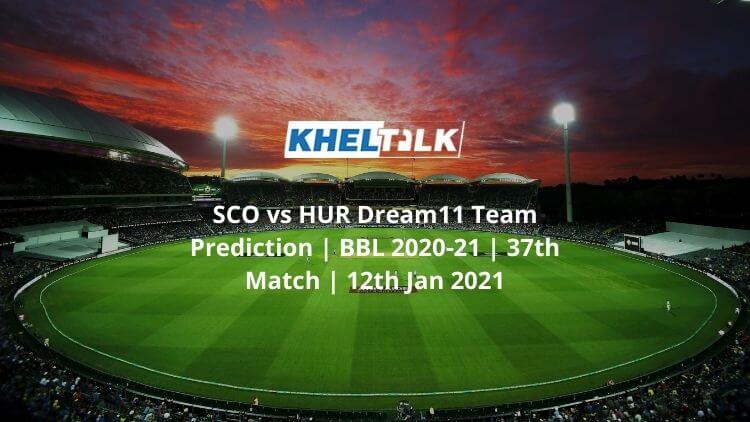 Perth Scorchers will host Hobart Hurricanes in the 37th match of the tournament. After initial losses, Perth Scorchers are currently looking like a different team and have won four matches in a row. One must give credits to Ashton Turner who took up the captaincy after Mitchell Marsh had decided to step down. Also, it seems like Marsh was right to step down too as his game has improved well in the last few outings. The team is currently in the fifth position.

On the other hand, Hobart Hurricanes began the tournament on a big positive start but are currently looking a bit low as they have lost two matches in a row. While they are at number three in the points table, they will begin this contest as an underdog, blame their form. In fact, Hurricanes went down to the Scorchers by 77 runs in their last outing which was more than a year ago.

Keeping all these aside, Hurricanes will be hoping to focus on the positive aspect here. The team is having an excellent record at Perth and most importantly, they have won the last three matches against the Scorchers at this venue. Let’s go through our Dream11 Team Prediction for the upcoming BBL 2020-21 affair between Perth Scorchers and Hobart Hurricanes.

So far, the Perth Stadium has assisted the batsmen more. The teams have preferred batting first here as the pitch tends to get slow in the 2nd innings, making the chase a bit difficult. On the other hand, the pacers have done well compared to spinners here, something to keep in mind while picking the fantasy team.

Perth Scorchers are currently making heads turn with their impressive comeback after a series of losses. Their batsmen have stepped up when it is needed and their bowlers have done well to defend targets with ease. A lot of credits must go into the fielding department as well. Colin Munro has been the star performer for the team in their last three matches where he has scored three consecutive fifties. He is certainly enjoying the conditions at Perth and has provided the platform for the finishers to come in and play their natural game here. With the ball, Jhye Richardson has been excellent and is the leading wicket-taker of the tournament at the moment.

On papers, Hurricanes are one of the strongest as well as a balanced team to lift the trophy but they couldn’t really get through in the last two matches and one must blame the whole team for letting the opportunities slip away. However, the team’s record at Perth will come in handy and something to look forward to for the team. The conditions here will definitely suit Riley Meredith who is the team’s leading wicket-taker and of course, a lot will be dependent on McDermott once again, who is currently leading the run charts of the tournament.

Colin Munro is in great form and has smashed three fifties in the last three matches. In fact, all those three fifties came at this venue. He so far has 237 in the tournament.

Ben McDermott is the leading run-scorer of the tournament currently. He so far has 299 runs from his 7 innings with an average close to 50 and he has a strike-rate close to 140 here.

Jhye Richardson tops the bowling chart in the tournament currently and is one of the reasons why Scorchers are doing well currently. He so far has 17 wickets from 8 innings.

Mitchell Marsh can contribute with both bat and ball. He so far has 4 wickets in the tournament and also has 187 runs from his 8 innings with the best of 57*.

SCO vs HUR Dream11 Team Prediction: Who will win the match

Going by the current form, Perth Scorchers will begin this contest as the favorites. However, one cannot take Hurricanes lightly as they will be looking to bounce back here. Short will be the man in focus as he had a century when these two teams met earlier. The toss and the early session will decide the winner of this contest.