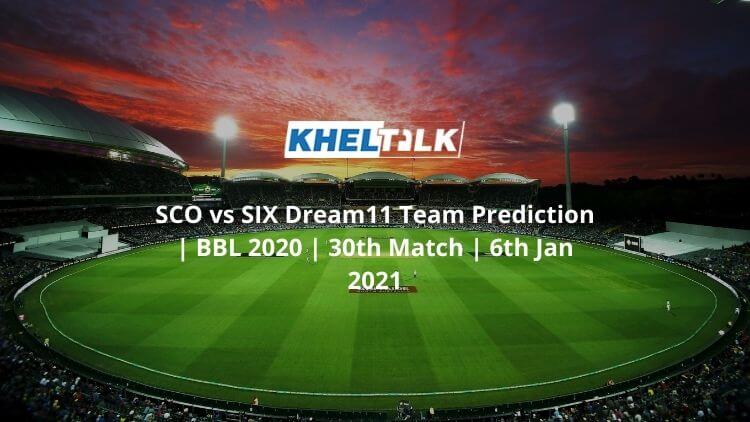 Perth Scorchers will host Sydney Sixers in the 30th match of Big Bash 2020/2021. Sydney Sixers are doing extremely well in the tournament and are at the top of the points table at the moment with 5 wins to their name. They will be coming into this fixture after a massive 7-wicket win over the Adelaide Strikers.

On the other hand, Perth Scorchers will enter this fixture will a new captain, Ashton Turner as Mitchell Marsh had stepped down from the role. Turner does have a good record with captaincy and has helped Western Australia to the Australian domestic 50-over title last summer in the absence of Marsh. Scorchers have won 2 matches out of their 6 so far and are at 7th position. Let’s go through our Dream11 Team Prediction for the upcoming game of BBL 2020-21 between Perth Scorchers and Sydney Sixers.

Perth Stadium is certainly a batting pitch and the team usually loves to bat first here. With time, the pitch does get slower which makes it difficult for the teams that bat second. In the only match in the tournament at this venue, Scorchers went on to defeat the Renegades by 96 runs.

Winners at this venue

It is more like a homecoming for Sixers’ Josh Philippe as he returns to the Perth Stadium. He will be looking to lead the team from the front with the bat once again as the team take on Perth Scorchers. Undoubtedly, the best team at the moment, Sixers have found the balance at the right time to get closer to the trophy once again.

After a series of lacklustre performances, Perth Scorchers have managed to turn things on in the last two matches and have done well to pick up consecutive victories. The Scorchers had managed to put up an outstanding show in the last outing against the Renegades where everything fell in right place for the team. They will be looking for a similar game here.

Joshua Phillipe is having an excellent tournament and is currently the 2nd leading run-scorer. He has 261 runs from 7 innings with a strike-rate close to 145.

Colin Munro finally found his form and is doing well in recent games. He smashed a fifty recently and in the tournament, he has 137 runs from 6 outings with a strike-rate close to 130.

The skipper Daniel Hughes will be looking to lead the team from the front once again here. He so far has 199 runs with an average close to 34 and a strike-rate of 134.45.

Josh Inglis has an average of 38 here and he will be hoping for yet another big knock here. He so far has 152 runs from his 6 matches with a strike-rate of 138.18.

SCO vs SIX Dream11 Team Prediction: Who will win the match

While Sydney Sixers are the best team in the tournament currently, one cannot ignore Perth Scorchers here at least not when they are in red hot form with back to back wins. For Sixers, the head-to-head record against the Scorchers doesn’t look good right as well. They have lost 10 matches and won only 6 six. On the whole, this match could go either way and will be a thriller for sure. This is the Dream11 Team Prediction from our team of experts.